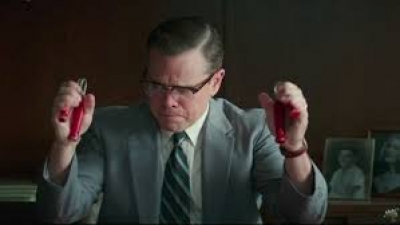 Gardner (Matt Damon) lives in Suburbicon with his wife Rose (Julianne Moore), her sister Margaret (Julianne Moore) and their son Nicky (Noah Jupe). It’s a quiet town not known for crime let alone any black families, until now. Set in the late 50’s this all white community has their first black family moving in and the neighbors are none too happy. A beautiful quiet family, Mrs. Meyers (Karimah Westbrook), her husband (Leith M. Burke) and their son Andy (Tony Espinosa) lived directly behind Gardner and his family. The neighbor’s did not take well to the Meyers but Rose and Margaret tried to break the ice a bit and asked Nicky to go play ball with young Andy. Sometime thereafter racism broke out and the white families tried everything possible to get the Meyers to leave their all white community.

When two tugs, Ira Sloan (Glenn Fleshler) and Louis (Alex Hassell) break into Gardners home killing Rose the neighbors can’t believe that a killing like this could happen in their neighborhood. Well at least the neighborhood before the Meyers moved in. Soon thereafter Margaret took over the family role taking care of Gardner and raising Nicky. When a strange man knocks on the door he introduces himself as Roger (Oscar Isaac) from the insurance company making a visit to ask a few questions about the settlement on Rose. One major problem, the pieces to the puzzle just don’t quite fit and from this moment on life in Gardner’s home is never the same.

Nicky tries to confide in Uncle Mitch (Gary Basaraba) what he has seen and heard within the house but when matters become worse and members begin to die one at a time it is Mitch that comes to the aid of the little boy. Outside the police are trying to protect the Meyers from angry racists but little do they know the tangled web that is spun in the house close by. In the end Karma has a way of veering its head proving that the guilty will always eventually have their day and it will not be a good one. Murder, racism, lies, greed, deception, anger, quite a bit of blood and the truth are all part of this sinister plot centered around some of the most pathetic group of idiots in a town called Suburbicon.

I guess this is considered a dark comedy but I must say I did not laugh much if anything I found it to be more of a thriller with a bit of horror and of course crime mixed in. Clooney has a strange sense of direction and as for the Coen brothers they always have an odd but usually meaningful look on life and I’d say once again their writing proves that statement. The film will bring out a number of feelings about racism, hate, family and what someone will do for money even to the ones they supposedly love. There is not much in terms of scenery to look at other than homes that look alike and people who think alike but it has a good score and a sense of realism from the past, sad to say.

Damon is a dark character here and plays it quite well making you second guess his mister nice guy image. Moore is that wholesome woman in the fifties that really has a smile on her face but fire in her heart. Jupe is spot on and quite excellent in his role as the mentally tortured child that tries to deal with all the crazy that has taken over his life and home. As for all the supporting characters each one of them play an intricate part in this story that you will either love or hate either way this film surely beats Clooney’s last venture by a mile, Hail Caesar. The only animal in this film which I believe lives in the end was a garden snake that Andy gave to Nicky during their friendship living not in a colored world but one of black and white. It is difficult to look at the way much of the white community treated the black community so many years ago and one can only hope that we all learn from it and never ever repeat it.

More in this category: « Thank You For Your Service Goodbye Christopher Robin »
back to top

We have 451 guests and no members online