Thank You For Your Service Featured 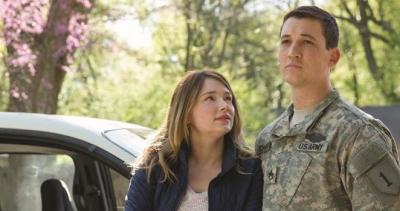 So the first words out of mouth after viewing this film were WOW...

I was captivated from start to finish. This is a great film that
depicts the true to life story of a group of combat U.S. veterans and
their partners attempting to re-integrate back into civilian life.
This captivating Drama unveils the severe issues of returning to normal
family life after very intense war combat and the struggles they face
suffering from PTSD. Their individual journey’s and their fights to find
peace in their minds when dealing with the U.S government and qualifying
for assistance is a reeling and emotional tale.

Director Jason Hall (also the director of Am. Sniper) was successful in
revealing a film that was factual and griping. There is no boredom in
this very edgy movie and you'll find your self entranced in the
characters and how they deal with all their problems. The roles played
by Sargent Adam Shumann (Mike Teller) and Tausolo Alati AKA Solo
(Beulah Koale) are executed true to reality. Sargent Shumann the rock
of his squad carries everyone’s burdens driving his PTSD to the max. And
Solo an American Samoan who credits the military for saving his life
will keep you on the edge of your seat wondering how anyone could have
normality after just harsh warfare.
The Wife's Saskia Shumann (Hayley Bennett) and Amanda Doster (Amy
Shumer) stay connected as friends as they battle to learn the truth,
understand how to help and to cope and stay loyal to their husbands
realities or memories.

There were several Pit Bull dog fight scenes that left me turning my
head from the screen because it was too real. The beautiful turn to all
of that depiction is that when the loosing dog is carried out to the
woods and left for dead... Solo goes after the dog, picks him up in his
arms as he would a wounded soldier/friend and takes him back where he
and Shumann stich him and nurse him back to health. Later on you see
that Shumann keeps him as the family pet and he has become a loyal
family member and is very thankful for having his life saved by these
two amazing humans.

As the credits rolled I had tears in my eyes because this film hit very
close to home with friends and family who have lost their lives
fighting for this country and came home to the plights that go along
with PTSD.

I highly recommend seeing 'Thank You For Your Service' and I hope
everyone takes the time to see this gripping film in hopes that more
advancement will come to the respect and care of our soldiers who
fight for our amazing country.