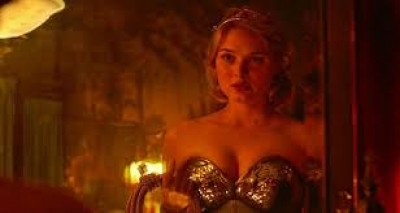 Professor Marston and the Wonder Women

New York City, 1945, Professor William Moulton Marston (Luke Evans) is being interviewed or more like interrogated by Josette Frank (Connie Britton) with the Child Study Association of America because of the improper depictions of a comic book hero known as Wonder Woman. As he tells his story we are flashed back to Radcliffe College during the year 1928 and the relationship between him and his wife Elizabeth (Rebecca Hall). Elizabeth was a very strong somewhat independent woman and a bit of a bitch feminist and William suddenly has eyes for a student known as Olive Byrne (Bella Heathcote) the complete opposite personality of his wife. Olive was sweet, innocent and cursed with beauty whose mother and aunt were two of the most radical feminists in the world but ironically Olive was raised by nuns.

William and Elizabeth had life changing experiences as Olive lived with them and when they moved to Rye, New York in 1934 their family grew larger. While William on a walk throughout Greenwich Village in New York City stumbled upon a certain kind of store the minds and pleasures of all three were changed forever more. William attributed his findings to his DISC theory but to others it may have seemed more like bondage and porn. Yet during this time and the use of some costume props Olive turned into the physical likeness of a strong, superior woman which launched William’s idea with the help of M.C. Gaines (Oliver Platt) to create a new comic hero like Superman but only a woman and this created the comic book, Wonder Woman. William did not hold back on his theories about women, violence, torture and sadomasochism instead he made it every part of his comic book which of course came under fire by the Catholics and ring wing conservatives.

This is an amazing written film that is based on a true story. Beautifully directed as well as written I am not sure if this story will find its true audience but based on how well Wonder Woman with Gal Gadot did in the theaters recently it may draw some attention. Music, costumes, writing, directing are all done well but it is the content that may not interest a younger movie going crowd. There is a lot of promiscuity throughout the story when sex develops among all three of the main characters so there goes the right winged conservative groups that will surely have something negative to say about this content to this day. You would think the world would change and become more accepting of all but sadly there are still those hate groups that exist and care more about other people’s personal lives than their own. Either way it is a story worth seeing especially if you’re fans of how Wonder Woman came to be. Evans, Hall and Heathcote control this story from beginning to end and all three perform their character rolls with perfection. It was interesting how Marston created such a strong female super-hero known as Wonder Woman from the women that surrounded his daily life.

More in this category: « The Mountain Between Us Happy Death Day »
back to top

We have 612 guests and no members online