The Mountain Between Us Featured 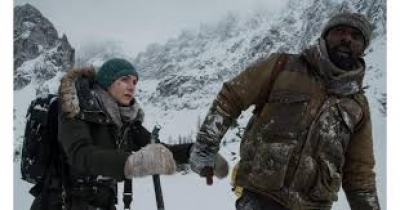 When a flight is cancelled Ben Bass (Idris Elba) a surgeon from London and Alex Martin (Kate Winslet) a photographer from New York who was supposed to be marrying Mark (Dermot Mulroney) the next day meet at the airport. Alex decides to share a small private plane with Ben since there are no flights for them out until the next day. A military pilot, Walter (Beau Bridges) and his dog (Raleigh & Austin) decide to fly the two people to their final destination. During their journey over the snowcapped mountains Walter experiences a stroke and the plane crash lands on the mountain tops.

With some minor injuries Ben tries to help Alex who suffers from a severely injured leg and without Walter the two strangers and the dog are stranded in an unknown wilderness. Unsure whether to wait it out in the body of the plane in hopes of a rescue or to try and walk it out Alex makes the choice to walk in search of help even though she has an injured leg. Battling the elements, the wildlife and the fact that they don’t even know each other they experience every emotion from anger to fear as they make their journey down the mountain in hopes of finding help before they die. Yet during their journey Ben and Alex begin to rely on each other in order to survive and when emotions run deep they both develop a love for each other that is of the highest level that most people could not experience in a life time.

When they eventually return to their lives they realize that even though the heart is just a muscle it was able to develop love on the mountain but could it survive in the real world. Maybe yes maybe no!

The film evolves around Winslet and Elba’s characters with more scenic moments than actual dialogue. We get to watch their struggle to survive while in the meantime their emotions start to take over maybe out of fear or possibly love. The cinematography is outstanding and the acting impeccable by Elba and Winslet but I felt that there could have been more moments of distress in order to bring the audience around into feeling for the characters. Obviously the journey is not easy but I felt the writing could have been more developed and the direction a bit more intriguing. A good score with some great scenes with the dog help to enhance the story but I kind of wish there were some more wow moments throughout the film. I actually would have liked to see less mountain time and more of their lives after to be honest since it would have definitely gave additional meaning to the final ending.

More in this category: « Victoria and Abdul Professor Marston and the Wonder Women »
back to top

We have 621 guests and no members online