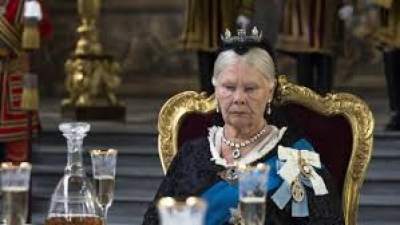 Based on true events – mostly, this story is brilliant and will make you laugh and cry as it takes you on a journey into the life of Queen Victoria (Judi Dench). Queen Victoria in the 1800’s not only ruled England but was the Empress of India as well. India has sent two servants, Abdul Karim (Ali Fazal) and Mohammed (Adeel Akhtar) to present a Mohar, coin, to the Queen as an appreciation and token of their gratitude. The two men traveled 5000 miles from India to the Windsor Castle to make the presentation and were informed during the presentation that took place during dinner by all means not to have eye contact with the 81 year old Queen. That did not quite work as a handsome Abdul locked eyes with the Queen making his life change forever and hers as well of course.

The Queen became infatuated with Abdul and rather than sending him and Mohammed back to India she requested he stay as her personal assistant until the end of the jubilee. The Queen was not happy in her old age; with 9 children and 42 grandchildren she stated to Abdul that no one really knows what it is like to be a Queen. A trip to Scotland then Florence Abdul traveled with her everywhere no longer a servant but now a teacher. He taught her the ways of India and the Muslim religion giving her lessons on how to write and speak his native language. Sir Henry Ponsonby (Tim Pigott-Smith), Berti, Prince of Wales (Eddie Izzard), Dr. Reid (Paul Higgins) along with most of the staff and relatives were unhappy of the relationship between the Queen and Abdul, sometimes fearing his motives. Yet when he would get caught in lies or untold truths the Queen would forgive him. Later finding out some other important facts of his life in India Queen Victoria decided to bring more of his life to England.

Things have gone too far when once again the Queen decides to bestow a huge honor on to Abdul creating treason within the Buckingham Palace. After 62 years in office, Queen Victoria was far from insane, a bit tired, old and overweight, fat as she called it, but she definitely had her mind about her. When she died her son made sure everything known about Abdul’s relationship with the Queen was destroyed, at least so he thought. Abdul moved to Agra in 1901 where he died in 1909 and India gained its independence in 1947. His love for her was unending.

This film was superb, brilliantly directed and written with a few questions about some words used that seemed to be a bit too modern for its time. The cinematography is breath-taking and the score perfect to the story. The costumes were beautiful bringing such elegance to the story. Even at two hours long I found myself lost in the story and the relationship that “Victoria and Abdul” had until the day she died. I laughed throughout the story, found myself intrigued in the characters and shed a tear at the end.

Dench is outstanding, just marvelous and plays the role of the Queen perfectly making her witty, boring, greedy, happy, sad, funny, and a number of other adjectives that all lead up to true perfection. Fazal brings his handsome looks, a beautiful smile, intrigue and mystery to his character as he and Dench control this story from start to finish. Izzard, Pigott-Smith, Akhtar, Higgins and a vast majority of other characters all add to the humor, drama and wonder of this film based on true events. An intelligent film that in my opinion is a must see by lovers of Dench and the ideals of history that is sure to inform and entertain you for almost 2 hours. I was a bit surprised though, where were the dogs!

More in this category: « Battle of the Sexes The Mountain Between Us »
back to top

We have 259 guests and no members online