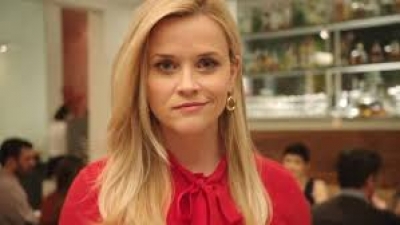 Born in Los Angeles in 1977, Alice Kinney (Reese Witherspoon) was raised in a very comfortable home with her very famous movie star parents. Her parents’ marriage did not work due to her father’s many other women and years later he passed away while his ex-wife Lillian Stewart (Candice Bergen) maintained her life in Hollywood. As for a grown up Alice she lived in New York but recently moved back with her two daughters Isabel (Lola Flanery) and Rosie (Eden Grace Redfield) to the home she grew up in in Los Angeles.

It happens to be the first day for the kids in a new school and Alice’s 40th birthday. Out at local restaurant with friends Alice bumps into Harry (Pico Alexander) a fine looking young man looking to make a movie from an already in demand short film, out of luck and a place to stay with his two best friends Teddy (Nat Wolff) the next best actor in Hollywood and George (Jon Rudnitsky) a brilliant up and coming writer. Several drinks later and Alice is sleeping with Harry and soon thereafter the 3 young men are living in her guest house. Lillian approves of the boys but Austen (Michael Sheen) Alice’s soon to be ex-husband currently living in New York working in the music industry just so happens not to approve of the living arrangements for Alice and his two kids. As the story continues Alice finds herself and the men in her life find their new home and work to be unpredictable yet meaningful.

In a story that deals with women in the work place, marriage, divorce, sex with someone half your age, children, Hollywood, friends and family the director/writer has thrown in everything she could think of so much so that it is too much. The story makes sense but plays out like a 130 minute movie rather than 90 minutes. It has its good moments but many times seems just too drawn out, cliché and a bit senseless. It has its cute factor but may have made more sense on the Lifetime Channel rather than the big screen. Thankfully there was some decent acting involved mainly from Witherspoon and Bergen but as for the three men not horrible but not too great either if I had to give points to one of them it would have to be Rudnitsky. Overall I would not waste my money on a ticket but it is a good movie to cuddle up to on the sofa during a rainy day. As for the animals in this film there is a dog but it did not have a starring role. Too bad the dog may have helpful move this story along a bit faster.

More in this category: « It Brad's Status »
back to top

We have 425 guests and no members online