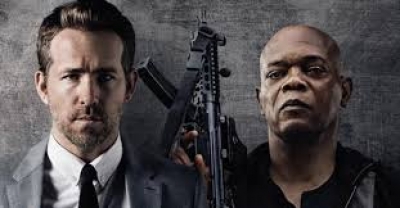 In London Michael Bryce (Ryan Reynolds) is working for Triple A Protection Services, actually at the time with Interpol, but when something goes wrong with a Japanese arms dealer at the airport he finds himself no longer driving a Jaguar, living in a beautiful home and eating the best of foods. Two years later he’s still one of the best protection officers in the world but is lowered to working with cocaine sniffing business men like Mr. Seifert (Richard E. Grant) and his little dog, as an Executive Protection Agent.

Meanwhile Interpol led by agent Amelia Roussel (Elodie Yung) is transporting Darius Kincaid (Samuel L. Jackson) to the Hage Netherlands to testify against President Vladislav Dukhovich (Gary Oldman) at the International Court of Justice for an array of various crimes including mass murders. Because he is President of his country he feels his word is final and he has the right to do whatever he pleases. Huh, sound familiar! Kincaid offered his testimony in return for his wife Sonia’s (Selma Hayek) release from prison. As predicted by Kincaid the transport doesn’t quite go as planned and Amelia and Kincaid find themselves on the run in Amsterdam. Amelia knows there must be a leak at Interpol so the only choice she has is to call her ex-boyfriend Michael for help. Little does Michael know that the man she needs protecting is Darius Kincaid, a big rival to Michael. But hey a job is a job and maybe he can get back into Interpol if he delivers Kincaid to the courts alive.

The journey is long and dangerous as Dukhovich’s men are around every corner not to mention the love hate relationship between Michael and Kincaid. In some of the most amazing car chases, shoot outs, fist fights and much more this drive, walk, run from point A to point B is anything but smooth. The bullets are flying, the civilians are running, the blood is spurting and the F bombs are frequent and the riveting action never stops but when it does hysteria kicks in to take its place.

We discover how Darius met Sonia over some danger, great music and a dance and how Michael met Amelia over a dead man. The bible states to never take revenge leave it to the Lord and yet through it all Kincaid really thinks he’s one of the good guys with over 270 kills under his belt. In the end the clock is ticking and the playground is filled with bad guys and if Michael doesn’t get Kincaid to the courts Dukhovich’s case will be dropped and he will be free to go to rule again. Albeit the truth comes out and just when you think all is moving in the right direction yet again there is more danger that later leads to one loving anniversary. As for the animals in the film, cows and dogs none seemed to be used in a bad manner or in any harmful way but I can’t say that for the people.

The film is explosive, exciting, loving, funny and just a great two hours of entertainment. I did see one of two bloopers like the one in the Mercedes but overall with the amount of dramatic and dangerous chase scenes, cars flipping, people dying and explosions I’m surprised I did not notice more than what I did. I predict this movie will do well at the box office solidifying once again the star power of Reynolds and in this case Jackson as well, both men play well together and should definitely consider a sequel. Great music with an added dramatic score this story is superbly written and directed from start to finish. I really can’t say anything bad at all because every time you blinked something else dangerous or funny would happen. Reynolds and Jackson make a great team and really both did excellent in this film. Hayek is hysterical even though she hardly leaves her cell. Oldman is once again kick ass as the bad guy which he seems to play so well and Yung who plays on the good side surely holds her own amongst the male leads. From the extras to the supporting characters this film is fast, exciting, intriguing and definitely worth seeing on the big screen.

More in this category: « The Only Living Boy in New York Logan Lucky »
back to top

We have 424 guests and no members online