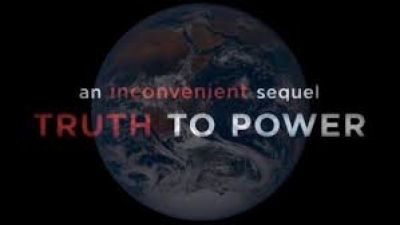 An Inconvenient Sequel: Truth to Power

In 2006 Al Gore filmed a documentary titled “An Inconvenient Truth” and in ten years he once again proves that the world is changing due to global warming and not in a good way. He has started climate leadership training programs around the world with the first one in his hometown of Tennessee with fifty attendees. Throughout the years into this year there are hundreds of attendees that join the climate leadership trainings all over the world and from as many as over 30 countries.

Gore proves through graphs and statistics that there are definitely more hot days presently than there were in the 1980’s and the days are proven to grow. The glaciers are proven to be actually exploding in West Greenland due to such temperature changes and from 1990 to 2016 the glaciers have lost twelve meters of ice. Where is all this excess water going well one place is Miami Florida which is flooding more and more each year with waters coming from the drains and manholes in the city streets. He proves that like other cities that are at high risk of massive flooding Miami is number one in the USA. Sad assumptions are made of what can be done but as long as money talks from corporations buying their way into politicians pockets this planet will never see the help that it so needs through renewable sources rather than oil, gas and coal which is a major cause of the world’s pollution.

In 1962 the first space picture of earth was taken and the famous blue marble picture in 1972 but when Gore received funding for NASA to build the DSCOVR satellite to orbit the sun with earth the Bush administration came into office and shelved the project. This satellite would have taken continuous photographs to show the ongoing effects from climate change on earth. It is addressed how wind power and solar power would increase business and help grow the economy while cleaning the atmosphere as well but big business in oil, gas and coal does not want to lose the piece of their pie. These businesses are not doing what’s right for the human population but rather what lines their own pockets at the expense of sick and dying people and it’s the carbon dioxide from their industry that is causing viruses and disease to grow like that of the Zika outbreak.

Heat energy is absorbed by our oceans which in turn create issues in the waters as well as causing more severe storms to occur in turn killing larger masses of human life. Remember Storm Sandy that hit NYC well that same scenario was explained in the 2006 film but laughed at by the red political party. In 2013 thousands of people died in the Philippines due to massive storms and flooding and rain bombs have not too long ago devastated parts of Tucson and Texas as well as in parts of Spain and Chile. More droughts cause more fires and in Syria alone farmers lost sixty present of their crops and eighty present of their animals from 2006 to 2010. In 2015 one hundred and fifty heads of state met in Paris to discuss the effects of climate change and President Obama was present.   This year President Trump does not even believe in climate change and promises to pull out of the accord.

In India there are over one billion people and over three hundred million are without any type of energy and have threated to open more coal plants which would increase pollution. They have no blue skies now only grey but when they were allowed a loan to move towards solar capabilities they accepted and their energy resources are growing and in a clean respect for their country. One of the major problems in switching over to renewables is that they need to be as cheap in cost as coal is currently. It is getting better in this new chapter of hope. Renewable energy is not red nor is it blue it is clean with no color so we all should be on board to love earth. Georgetown, Texas is a red city but when it comes to resources they are 100% renewable. This is our home not living under a doom on Mars but that’s what it may come to if we don’t speak truth to power. Are you listening to the world Mr. Trump or to your own pockets? If Trump won’t lead American than the American people will!

I absolutely became more educated myself by watching this film and it made me want to speak out more. Why do people try to silence your voice when you are only trying to do what’s best for this world and the plants, animals and humans that live life on it? If there is one thing I would say about this documentary is that I wish they included how climate change is affecting the plant and animal life on earth. In this respect I felt the directors missed a major mark since so many people cherish their animal friends as much as and sometimes more than other humans in this day and age.

More in this category: « Kidnap Detroit »
back to top

We have 832 guests and no members online