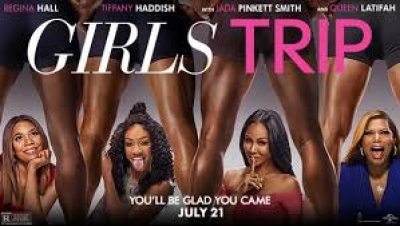 In 1995 four young best friends graduated school and later in life all seemed to move in very different directions. Sasha (Queen Latifah) became a writer but not just any type of writer she wrote for a trashy tell all blog that told dirty secrets about celebrities and important people. Dina (Tiffany Haddish) has an attitude, a loud mouth and apparently a love for sex and was just recently fired from her job. Lisa (Jada Pinkett Smith) is probably one of the most level headed out of all the women, she still lives with her mother, dresses like she’s always going to church and has two beautiful children. Ryan Pierce (Regina Hall) is the most successful out of the four women, married to Stewart (Mike Colter) and author of a bestselling book, “You can have it all” Ryan has life by the balls, wining, dining and the best of everything. At least that’s the way it seems from the outside looking in.

Thankfully Ryan has an assistant to help her through her busy schedule and Elizabeth (Kate Walsh) not only lends her hands to Ryan but uses them often on Stewart. Ryan finally decides to take some time away and what better way to get away then to visit the Essence Festival in New Orleans and reunite and party with her long lost friends. All is going tremendously as the girl’s celebrate in NOLA and there is no better feeling then to have the “Flossy Posse” back together again. These women are no longer girls but one thing for sure they have not forgotten how to party. Bourbon Street is definitely a party within itself but drinks, drugs, fruit, zip lines and men later what happens in New Orleans does not always stay in New Orleans. When Sasha receives a trashy photograph involving Simone (Deborah Ayorinde) from a reliable source she is faced with paying the rent and having a job or possibly losing a friend forever. Well the truth shall set you free and even if it does not turn out for the best it is always better to be honest than not.

Hurt feelings, more drinking, a bar brawl and a dance off later these women are just getting started. Ryan though is not only there to have fun but also to close a huge business deal with Bethany (Lara Grice) but as the walls start falling down around her it’s not looking too good. Married versus partner issues, a grapefruit gone wrong, feelings for a good friend, Julian (Larenz Tate), and a major girl fight among sisters and matters are getting worse. Basically there is trouble in paradise and for one relationship expert she must make the choice of the real her or the wrong her either way the truth shall set her free. True friends will never leave you no matter what bridges get burned as long as there is love, trust and honesty a true friendship will never waver.

This film was absolutely hysterical. It reminded me of “Bridesmaids” which I loved. I mean this film is so funny the audience was laughing so loud that you miss several other lines in the film. Even the direction is spot on along with some great music and just a good old group of friends out for a party weekend with no limitations. Well, very little limitations since they are all grown up now, kind of! This film is crude, rude, raunchy, sexual, bad language and definitely not children friendly but it will leave you laughing for hours. A great cast Haddish is hands down the most hysterical of them all. If they were the “Golden Girls” Haddish would fit the role of a nastier Blanche for sure. She does not hold back for a minute and thankfully so since she made me laugh my butt off. Latifah plays a bit safe but helps to add a bit of dilemma into the story. Pinkett Smith finds her inner bad girl once again and when she releases the beast it becomes the biggest she ever seen, literally. As for Hall she too has her fun yet serious moments but throughout all the partying and excitement it is the last part of the movie that wins the applause. There were not any animals in this story and thankfully so since you never know what they would have been used for and in what positions but there are a number of cameos. Just saying! Anyway a barrel of laughs from start to finish so if you can handle some crazy times then I highly recommend checking this trip out in a theater near you. Girls just wanna have fun!

More in this category: « Dunkirk Valerian and the City of a Thousand Planets »
back to top

We have 406 guests and no members online