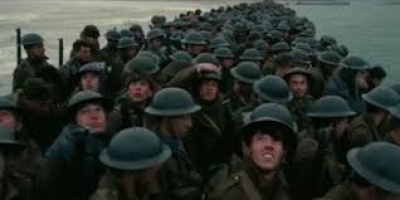 As the Germans surround the British and French armies there is nowhere to run but the sea. Thousands of soldiers are trapped at Dunkirk awaiting their fate. It seems what they truly need is a miracle in order to escape death.

A few men are walking through town when bullets ring out around them. One young man, Tommy (Fionn Whitehead), is able to escape only to be trapped on the beaches of Dunkirk awaiting help from the outside world. He notices another man, Gibson (Aneurin Barnard), in the dunes burying a body after stealing his clothes but Tommy does not ask him questions rather helps him them moves on. Soon thereafter these 2 men devise a plan to cut the crowds awaiting British ships coming in to take them to safety. The problem is that any large ships coming into Dunkirk where soon bombed or torpedoed sinking to the ocean floor and taking so many men with them.

Civilians outside the boundaries of the war torn areas of Dunkirk have decided to help as much as they could and traveled by their own boats to save dying men. Mr. Dawson (Mark Rylance) his son Peter (Tom Glynn-Carney) and seventeen year old George (Barry Keoghan) embark upon their boat the Moonstone on a journey across the waters into the war zone to do what they can to help bring lives back to safety. Although when they pick up a single soldier (Cillian Murphy) sitting atop sunken wreckage their hearts and minds are soon tested on whether to proceed forward or turn around and return to the safety of their own homeland.

In the air pilots Farrier (Tom Hardy) and Collins (Jack Lowden) are doing everything they can to protect their men below. Bullets, bombs, torpedoes and fire as well as water are stopping at nothing to take so many lives. Overall in the end there are so many military lives lost yet thankfully so many lives found.

Praise to Nolan for making such an awarding film and shedding light on what so many soldiers did for freedom and the safety of their country. There is not a lot of dialogue at all in this story and for what dialogue there is sometimes it is tough to hear or understand yet on another note it is truly not even needed since the film stands on its own without it. I mean the story unfolds visually from start to finish, beautifully directed by Nolan with some of the most superb cinematography accompanied by a bone chilling score as we the audience watch the realism of war and what it does to mankind, spiritually, mentally and physically. 1. The Mole. One week, 2. The Sea. One day, 3. The Air. One hour. Never a dull moment in this film Nolan unveils so much about what is happening through the expressions rather than words of the actors. Whitehead, Hardy, Rylance, Barnard, Keoghan, Lowden, Murphy and so many others are all spectacular and help to draw the audience into war as if you yourself were standing on the beaches of Dunkirk. My father fought in WWII and I personally grew up with the results of what such a war can do to a man’s soul.

More in this category: « A Ghost Story Girls Trip »
back to top

We have 235 guests and no members online