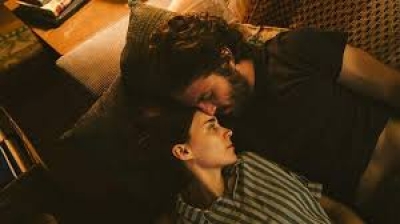 Review written by Jon Patch with 1 out of four paws

A young couple (Rooney Mara & Casey Affleck) move into a one level older home she explains to her husband that when she was a little girl her family used to move all the time so she would write notes, fold them up really small and hide them in small places in the house. She always felt if she ever left her current location that there would always be a piece of her that remained. One night while asleep they were awakened by the sound of the piano but when they searched the home they were alone. Sometime later he was in a car accident and died. After she went to see his body in the morgue he later sat up covered in a white sheet and rather than going into the light found his way back to his one true love and the house that contained so much history.

Seasons pass, he communicates with another ghost across the way, lights flicker, books fall from the shelf soon it becomes moving day. At all times he is in the home she never sees him no one does until a Latin mother and her two children move in and at that time the ghost makes himself known. His wife had left a small note in the crevice of a door frame and throughout time he tried to dig it out to read what it said. Throughout time wrecking day comes leaving only one ghost rather than the two, he then travels through past and future within his boundaries but what he eventually discovers is not what he may have wanted to know. Or is it?

This is an artsy type cinematic film that will leave you pondering what the heck you just sat through that is if you stay that long. The film tends to be like a day of sitting in a room and watching paint dry especially the pie scene which I thought would never end. I can understand where Lowery was going with this oddly produced story and since I can relate on some levels I found there to be some very intriguing, thought provoking moments. Overall though I believe word of mouth will destroy this slow somewhat boring film from any kind of box office dollars. I can’t believe that other than the two leading actors there was most likely not much of a budget for this film. Affleck has a small role other than being under the sheet for 98% of the film if that was even him who knows for sure but Mara and he for what actual scenes they have both do a nice job without very little to no dialogue. Again if you look beyond the middle part of the film but pay attention to the beginning and especially the end you might get to see some light at the end of the tunnel. No pun intended!

More in this category: « The Big Sick Dunkirk »
back to top