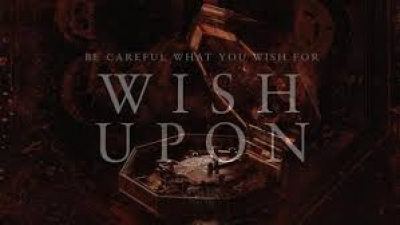 A young Claire Shannon (Raegan Revord) is out riding her bike with her puppy Max by her side as her mother Johanna (Elisabeth Rohm) takes out some garbage, moments later Claire witnesses the unspeakable. Years later, Claire (Joey King) is living in the same house with Max and her garbage scavenging father Jonathan (Ryan Phillippe). Claire is far from the most popular girl in school and is the constant object of disaffection from the so called cool kids, Darcie (Josephine Langford), Tyler (Alexander Nunez), Lola (Daniela Barbosa) and the boy of her dreams Paul Middlebrook (Mitchell Slaggert). She does have two best friends though, June (Shannon Purser) and Meredith (Sydney Park) who tend to support her as much as Claire does them.

One day while her dumpster daddy was out rummaging through garbage cans he comes across a music box that he decides to clean up and give to Claire for her upcoming birthday. Unable to open the locked box Claire tries to figure out the ancient Chinese writing on the outside. She realizes it says seven wishes but that was about it so she decides to give it a shot. First wish comes true but she thinks it is a coincidence and that the first death of a loved one was an accident. Although when something happens to her rich Uncle August (Victor Sutton) she begins to realize the connection, make a wish and sacrifice a life that she knows. The neighbor Mrs. Deluca (Sherilyn Fenn), Gina (Alice Lee), Ryan Hui’s (Ki Hong Lee) friend, Carl Morris (Kevin Hanchard) her father’s buddy, no one is safe from possible death as Claire makes her wishes to be rich, popular and in love.

With the help of Ryan as people are dying around Claire they discover the legend of Lu Mei and the demonic connection to the box but the question surfaces whether it is too late for Claire, her family and friends. In the end the question arises if you had the chance to do it all over would you or could you? As for Claire the ones that once noticed her to make fun of her in the end didn’t even see her!

There are several twists to the story line which is actually pretty well written and thankfully helped out with a good score but it may have been the direction that truly lacked here making the story more of a thriller than horror. The film has its moments but at times becomes cliché and predictable. If you have ever seen the “Final Destination” films than you’re not far off from the plot here although the destination stories were so much better than this one. You have to stay through the credits because there is a teaser to the possibility of making this story a franchise but I think that will fall on word of mouth that could destroy that chance entirely.

King does well carrying this story from start to finish but the other supporting actors that play her class mates leave much to be desired with the exception maybe of Park who tends to hold her own. Phillippe of course is a seasoned actor and definitely does a nice job here as does Lee but for the remainder of the cast including most of the students I’d say time for a refresher course on acting 101. Thankfully Max the dog was spot on!

More in this category: « War for the Planet of the Apes The Big Sick »
back to top