War for the Planet of the Apes Featured 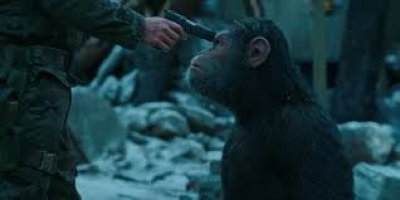 Fifteen years earlier the Simian Flu wiped out much of mankind, humans that is, but the war between the remaining humans led by the Colonel (Woody Harrelson) and the apes led by Caesar (Andy Serkis) continues to exist. A small group of soldiers ascend upon some unsuspecting apes in the forest a battle rages on killing many on both sides with a few humans taken alive. Apes did not want this war but they must fight to stay alive and because some apes fear the fact that they followed Koba (Toby Kebbell) the creator of this war they seek shelter working as donkey’s for the humans. To show that the apes are not savages they released the men with a message for the Colonel. Caesar knows they cannot hide out in the forest for long and when his eldest son Blue Eyes (Max Lloyd-Jones) and friend Rocket (Terry Notary) return from a long trip they inform Caesar of a desert area safe from man and war.

Eventually back at their hiding area Caesar meets up with his wife Cornelia (Judy Greer) and his young infant son Cornelius (Devyn Dalton) as they plan to leave soon for the new area. Winter (Aleks Paunovic) wishes to leave immediately but Maurice (Karin Konoval) along with Caesar thinks it’s best to wait a little longer. Meanwhile while they sleep the Colonel has found the apes camp and after an attempted raid it leaves Caesar raged with revenge as Koba once was due to the death of loved ones. Caesar can speak with words but the others communicate through sign language. He informs the herd to travel towards the desert as he goes looking for the Colonel’s camp with three other apes. During their journey up north they stumble upon a young mute girl, Nova (Amiah Miller), who they end up taking with them in their search for the Colonel. It’s not until they meet one very quirky ape, Bad Ape (Steve Zahn), do they find what they search for which is also Caesar’s worse nightmare.

The apes are taken prisoner and made to work to build a wall this wall is what the Colonel hopes will protect him from other humans that are out to destroy him as well. Held captive Caesar and his herd must devise a plan to escape and the only outside help is that of two apes and a mute young girl. Some humans are still dying from the Simian Flu as apes are dying from the hand of man. In the end it is Mother Nature that fights within the war zone and as for the herd of apes they now know they are strong with or without Caesar.

This film in my opinion is the best out of the three. The director is spot on as are the writers and with my being such an animal person I truly appreciated the humanity, the meaning, the thought and overall the provoking reflection into our own lives while watching this story of war, revenge, love, understanding, good and evil. What would man be if not at the top of the food chain, in control of all life around them? If animals could speak would we look at them differently, would we fear them or accept them? Just because they are different does it give humans the right to destroy them?  Apes as humans breath the same air, give birth to young, eat, sleep, work as humans do and can survive in the wild much easier than man but we still look down on them as just an animal. What would you do if it were these animals that one day decided enough is enough and they fought back for their freedom? This story contains some similar takes from other films past and present but the one thing I liked about it most was that the director and writers gave the film hope and meaning that love can co-exist between different species as long as we understand our differences and accept them.

Harrelson at first it took me a few minutes to accept him in this role but soon after his face make-up was removed it worked for me. As for the actors that played apes they were superb and even better than previous films. I have always been a fan of the old Planet of the Apes films with Charleston Heston but I truly enjoyed this new film from beginning to end because throughout the violence of war we also found meaning to live.

More in this category: « Spider-Man: Homecoming Wish Upon »
back to top

We have 662 guests and no members online