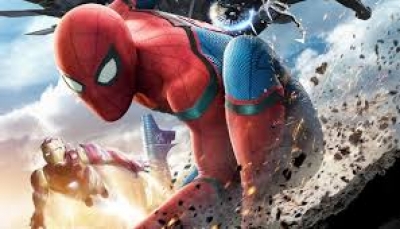 After the devastation of Stark Enterprises a private work crew is cleaning up tons of alien junk from the clash with Iron Man that is until Anne Marie Hoag (Tyne Daly) from the Department of Damage Control steps in to take over. Adrian Toomes (Michael Keaton) is none too happy about the situation so he and his men before being expelled decide to steal some of the junk for their own profit. Since the world is changing Toomes decides to change too by becoming a bit of a bandit or more of a vulture, eight years later.

Happy Hogan (Jon Favreau) works for Tony Stark (Robert Downey Jr.) who by the way has initiated Spider-Man, aka Peter Parker (Tom Holland) into his internship program. Stark has even given Parker a new suit as Spider-Man so he isn’t running around in some homemade costume; this suit has all the bells and whistles of which Parker is not quite aware.

Two months later, back at school in Queens, Ned (Jacob Batalon) finds out about Parker and promises not to tell anyone, a not so simple task for Ned. Yet one day in class Ned spills that Parker is friends with Spider-Man in order to get invited to Liz’s (Laura Harrier) house party. Liz happens to be Parker’s love interest and Captain of their school club of which they will compete in DC at the U.S. Academic Decathlon with Michelle (Zendaya), Ned, Flash (Tony Revolori) and a few other school mates. A trip to the Washington Monument does not quite turn out as expected since Ned was carrying a piece of the alien junk Spider-Man obtained during an altercation with Toomes men. Everything goes crazy one day on the Staten Island Ferry when Spider-Man decides to take matters in his own web, capture the Vulture (Michael Keaton) and his men and prove to Stark that he is ready to be an Avenger. Things don’t quite go as planned for Spider-Man and Stark asks for his suit back. Parker is told that if he feels he is nothing without the suit than he should not wear it, strong words from Stark.

Back at school it’s time for Homecoming and Parker has asked Liz to be his date. Little does he know that when his Aunt May (Marisa Tomei) drops him off at Liz’s house what he finds is one of his biggest nightmares. Back at Stark Enterprises Happy is loading up a plane with all of Stark’s technology since they sold the building and are moving upstate. Once again Spider-Man decides to take matters in his own web causing chaos and destruction along the way but overall making good on his own. In the end, Parker proves he could be worthy of Starks trust but secrets are revealed to love ones and sometimes the one you may love the most is standing right in front of you. WTF! Remember to stay all the way through the final credits to experience the entire homecoming.

What can I say other than great direction, writing and acting. I enjoyed actually getting more intimate with Spider-Man by watching what life is like at school and with his friends and enemies. We still get the how this device works issues for Spider-Man when he tries on Stark’s manufactured suit which adds a bit of excitement and hysterics to the story line. Great music and a young feel to this story more than any others from the past will appease the younger audience for sure. The special effects are great and pretty constant throughout the story but I really liked the amount of character development the writers gave to Parker and his friends. There are many twists and turns, several that I did not even mention above so as not to ruin them so make sure you pay attention to the brilliant dialogue.

As for the cast, Holland is truly a great Spider-Man. I personally have always been a fan of Tobey Maguire as the web slinger but Holland really gives him a run for his money. Keaton is always spot on and truly does not disappoint here at all. Ironic he once player Batman and is now a villain in Spider-Man. Downey Jr. is not the main focus here as Iron Man but more of a supporting character mentoring Parker to join the Avengers one day. Tomei does not have a huge role but she is an asset to the story. Favreau as well does not have a big role but plays what he does quite well. Gwyneth Paltrow has a cute cameo and Zendaya, Glover, Harrier, Revolori, Daly and several others have meaningful supporting roles but not as meaningful as Batalon who at times becomes Parker’s right hand man adding some levity to their scenes. Albeit this story leads up to some bigger projects coming down the road so get ready to see much more of Holland and the rest of the cast in the not too distant future.

More in this category: « Baby Driver War for the Planet of the Apes »
back to top

We have 931 guests and no members online