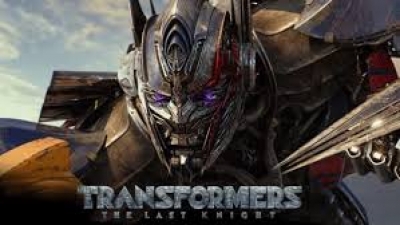 There is a major war taking place in the dark ages and the Brits are sure to be defeated unless a drunken Merlin (Stanley Tucci) can use his magic to save the day. Well without sacrifice there can be no victory and when Merlin approaches an Autobot for help he gives Merlin his staff and dragon. Sixteen hundred years later, a young girl, Izabella (Isabela Moner) a homeless young girl lives in a secured private area on earth with Canopy and her mini-robot Sqweeks (voice of Reno Wilson)that is until Canopy was destroyed by Colonel William Lennox (Josh Duhamel) and his TRF associates that are out to rid earth of the Autobots. This is where Cade Yeager (Mark Wahlberg) appears to save the day and who also becomes the keeper of the talisman which will help in finding the staff once owned by Merlin but never found. Why must they find the staff? Because it will help them save earth!

Quintessa (Gemma Chan) is on the dead planet of Cybertron and if she can obtain the staff with the help of Megatron (voice of Frank Welker) she will be able to destroy earth and all mankind on it. Meanwhile Izabella joined forces with Cade and the Autobots Bumblebee (voice of Erik Aadahl), Hound (voice of John Goodman) and several others to try and save earth even though they currently have the TRF and Megatron out to destroy them. It is discovered that Cade is the chosen one, the Knight, who is to save the day and is summoned by Cogman (voice of Jim Carter) the butler so to speak who happens to work for Sir Edmund Burton (Anthony Hopkins) in England. Sir Burton is quite aware what is going on with the end of the world and has summoned a teacher at Oxford, Vivian Wembley (Laura Haddock) to join Cade and himself at his castle. You see Vivian is a descendant of Merlin and is the only one that can find the staff, control it and save earth and what’s left of the human population.

Optimus Prime (voice of Peter Cullen) has come out of hiding but has gone rouge working with Megatron and Quintessa to find the staff. Oddly enough the people of earth were the only place in the universe that let Prime call home. When they find the staff Vivian must go to Cybertron and destroy Quintessa in order to save earth. So it takes all the Autobots that are working with Cade along with the TRF and a few others to come together and battle evil in order to save mankind. Sometimes though what you thought was your sudden enemy turns out to truly be your friend working side by side for the good of mankind. In the end in an epic battle it is time to come home for now that is until Unicron makes its presence known.

Just as expected, the film is high on CGI, special effects and overall as a very simple yet far-fetched story. It looks like the director had a busier work load than the writers since many times the photography and special effects in this 3D action adventure out-weigh character development and good lines. It seems they tried too hard to put humor into the story but it did not work for any of them other than the robot Cogman who happens to be absolutely hysterical. The war scenes are phenomenal especially with the help of 3D but I still found myself getting a bit disinterested after a while. So many of the scenes are so over the top that it took away some of the potential to be real. I know it’s not real of course and others may say it’s a movie which I understand but some moments were just way to fantasized for me. Autobots are machines and apparently can rebuild themselves but obviously humans cannot but still ended up being tossed from point A to point B with the lack of injuries.

It’s a huge cast with many voice talents for the Autobots which by the way are all excellent. Wahlberg once again proves he can play a good action star not exactly 100% in this role but he does keep the story alive. Hopkins is always a joy to see on the big screen and as usual does not disappoint. Haddock is definitely a looker but also proves that she can act and is probably one of the best female sidekicks to the leading man in this case Wahlberg. Duhamel is mostly in the battle scenes but does a nice job of moving his TRF team to war and survival of the fittest. Moner can definitely act well and Carmichael who plays Jimmy was a bit off pace with the humor but ended up being a decent distraction. I am a fan of Tucci and his acting skills but I believe given the direction he was given it missed its mark a bit with me. Overall this film is high on effects but a bit low on character development yet it will definitely entertain you even though in my opinion it was too long and too over-thought but I did enjoy the dinosaurs.

More in this category: « 47 Meters Down Despicable Me 3 »
back to top

We have 506 guests and no members online