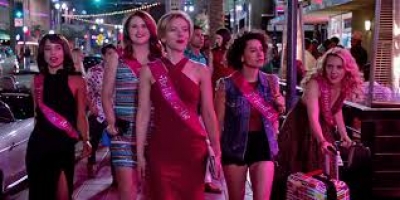 Review written with 3 paws out of 4

The year is 2006 at George Washington University and Jess (Scarlett Johansson) and her bestie Alice (Jillian Bell) are playing cups against the guys and if they win at the Halloween tournament they will be the first girls to do so. Celebration later at the dorm Jess, Alice, Blair (Zoe Kravitz) and Frankie (Ilana Glazer) are having a vibrating good time.

Ten years later, Jess is running for State Senate, Alice is a teacher, Frankie is an activist living from place to place and Blair is going through a custody battle for her son. Jess is not doing so well in the political pulls, a matter of fact her opponent that texted out pictures of his penis is doing much better than her. Alice has planned a bachelorette party for Jess and no matter what it takes they are going away to Miami with Frankie and Blair to celebrate. While Peter (Paul W. Downs) stays at home with his best men Patrick (Patrick Carlyle), Jake (Eric Andre) and Tobey (Bo Burnham) to celebrate over a wine tasting. First night out for the girls in Miami at dinner Jess’s Australian friend Pippa aka Kiwi (Kate McKinnon) shows up making it a party of five. Alice is a bit obsessed with Jess so the last thing she wants to do is share her with a foreigner. After a night of cocaine, drinks and just crazy wild times the girls head to their Miami home for the week. The doorbell rings and standing at the front door is a very hot hunk named Scotty (Ryan Cooper) presumably the male stripper. Well after a wild half naked dance they kill him and not knowing what to do they try to dispose of the body in so many ways. Nosey neighbors out looking for a threesome Pietro (Ty Burrell) and Lea (Demi Moore) are a factor since they keep sniffing up Blair’s underwear so to speak.

Meanwhile during a frantic conversation with Jess, Peter thinks she does not want to marry him after all, grant it everyone says he’s out of his league, so he hops in a car, men diapers, red bull, meds to help him stay awake and off he goes by himself on a road trip to Miami. Let’s just say his journey is not uneventful to say the least, meth, penis, cops and panic all lead up to one smashing encounter with Jess. As for Jess and the girls well the real Scotty the body (Colton Haynes) shows up and after a few gropes he ends up in bed alone and injured. As the night rolls on and the girls have no idea what to do the police show up, Detective Ruiz (Enrique Murciano) and Detective Frazier (Dean Winters) and what happens after this is only a testament to what can happen at your own bachelorette party in a crazy city like Miami. In the end do not leave until the final credits roll if you want to know how the story truly ends. A good time had by all and to close the night off a pot full of sparkling penis pasta.

The movie in my opinion doesn’t come close to “Bridesmaids” but it is still quite entertaining. I believe the writing is a bit weak in places along with some of the direction. They miss the mark on what could have actually been quite hysterical ends up as just cute or funny in a lesser sense. The story is somewhat predictable but does have a fairly decent twist in it that plays out well. Other than being a bit cliché the story in itself keeps your attention from start to finish but mainly due to the acting by the five female leads more so than the guys which are not even close. Good music, some nice scenery, several adult situations, drugs and bad language all add up to what you pretty much expect within this comedy.

Johansson proves once again that she can play a role straight or as a comedian either way she knows how to work a scene. Bell is funny and for the most part keeps the laughter going in this film along with McKinnon who by the way has some really good vocal chops. Kravitz and Glazer play it a bit more straight up until the end that is thanks to some lessons from Moore and Burrell who both play horny well. Carlyle, Andre, Burnham are pretty much uneventful but Downs does a pretty good job although I felt he missed his mark during some scenes on his road trip. In this case I wanted more not less! Haynes was trying too hard but Cooper although a short life plays dead pretty well. Think “A Weekend at Bernie’s” in a lesser sense. Murciano and Winters have a small scene but important to the plot. Overall a good film that I would recommend to see in the theater but a shot or two may help make the film a bit funnier than it is! Remember do not miss all the credits because if you do you’ll feel like there was a big hole in the unfinished story line.  The end helps to bring closure!

More in this category: « Cars 3 The Book of Henry »
back to top

We have 340 guests and no members online