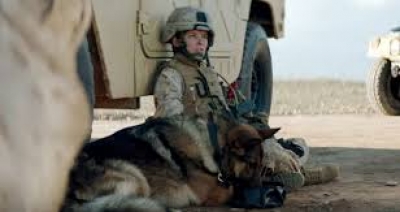 Megan Leavey (Kate Mara) lives in a small American town where not much in her life is happening. Her parents are divorced and her best friend had recently died. Walking past a recruiting station she reads a sign, see the world become a Marine, and she does straight to Paris Island, South Carolina for training camp. After graduation Megan heads to Camp Pendleton where she begins to meet fellow Marines that soon become friends. One night out and caught by military police for an indecent act Megan is soon sent to kennel duty cleaning up after military dogs while also acting as there attack decoy in training. Not exactly what Megan had planned while serving her country but something changed when she encountered an aggressive German Shepherd named Rex. It wasn’t too long after that Megan found her purpose and it was to train and work beside a dog, detecting bombs and weapons in affect saving fellow military lives.

The position she wanted was not quite so easy, Megan needed top grades and excellent shooting scores in order to be considered. She was entered into the program and her first dog was a can, not a living breathing dog but an actual can. When things don’t go well with Rex and his trainer Megan is soon assigned to Rex and even though there are personality issues between the two soon thereafter a bond is forged and both are shipped out to Camp Ramadi in Iraq for seven months. This is where she meets Matt Morales (Ramon Rodriguez) and his dog Chico who soon becomes more than a friend and supporter. Working in Iraq Megan soon became tough, learning exactly what it takes to stay safe and keep her fellow soldiers safe as well. Both Megan and Rex proved their skills in Iraq but during month six while out in the desert Corporal Megan Leavey and Rex experienced firsthand the powers behind their enemies.

After returning home to her family and experiencing separation anxiety and depression away from her dog Rex Megan tries to adopt him but after Dr. Turbeville (Geraldine James) inks Rex as unadoptable he is sent out into the field and will most likely eventually be euthanized. Megan decided to leave the Marines after her tour and the hardest part was saying goodbye to Rex but when she tries to adopt him even her commander Gunny Martin (Common) could not help. Megan would not give up and in the end it became her biggest fight yet to bring her best friend home to live out his life surrounded by unconditional love.

The film depicts a number of aspects of war and the process it takes physically and mentally to become a Marine. I must say though it was great to see a film smartly directed and written that shows the life of military dogs and exactly what they do with the love from their handlers to save lives. Filmed mostly at Megan’s home and the military bases she worked at the audience does get to see several locales in Iraq, the Iraqi people, the stray dogs in the streets, the chances taken by soldiers, the trust involved in their dogs and the effects war has on both soldiers and their K9’s. Even though there are some moments I can tell Rex was responding to its trainer off camera they are far and in between and more aware to me since I host a national pet show and am educated in some of the techniques involved with working with animals in films. Great photography along with an appropriate score and trying predicaments on soldier and dog all add to a wonderful film that veterans, soldiers, pet lovers and Americans would all appreciate seeing on the big screen. Mara is exceptional as is Common and the supporting actors all add to the importance of this story but it is the bond between human and dog that shines here and rightfully so since the war dog is truly the star.

More in this category: « The Mummy Cars 3 »
back to top