It Comes at Night Featured 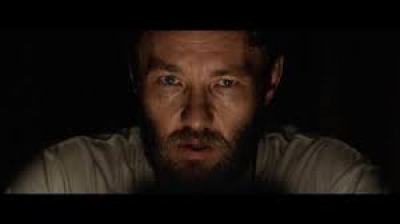 It Comes at Night

A24 and Animal Kingdom present an R rated, 97 minute, Mystery, Horror film directed and written by Trey Edward Shults with a theater release date of June 9, 2017.

We all know what it is to experience loss at one time or another in our life but what if you were the one that had to take life away from your own family? Paul (Joel Edgerton) and his wife Sarah (Carmen Ejogo) along with their 17 year son Travis (Kelvin Harrison Jr.) are boarded up within their country home along with their dog Stanley (Mikey). Travis’s grandfather Bud (David Pendleton) is sick, locked within a room as the family wears gloves and a gas mask to say goodbye. You see almost like a wild animal Paul and Travis take him out into the woods to shot him and burn his body.

Back inside the home which they enter and leave only at daylight through the red door it is truly the only way in or out. There is some type of illness plaguing the world and the family is trying to hide out and away from infection. That is until a stranger breaks into the house just on the other side of the red door. We soon discover that this man, Will (Christopher Abbott) is seeking refuge for his wife Kim (Riley Keough) and their young son Andrew (Griffin Robert Faulkner) but Paul is uncertain of letting anyone in their home thinking they may be infectious.

When the family does move in all six of the residents must learn to adapt and trust one another beyond paranoia and thoughts that someone is lying and that if one becomes infected chances are they all will. In the end it is one man’s desperation to protect his family and he will stop at nothing to make sure he does so since blood is thicker than water.

As I write this review I can see where Shults was trying to go with the film and the story line but I do feel that there are several holes within the film. Of course it’s a low budget film especially since they never seem to leave the house or the inner woods surrounding the home. As for what comes at night I’m really not sure so I felt the title doesn’t fit the crime so to speak since most of what happens in a horrific sense seems to be during daylight. There is suspense in this story so the buildup is there although so is the anticipation of knowing what is going on outside of this country home. It is a somewhat clever film but overall seems to have left me a bit empty and wanting more but hey Hitchcock did well with stories somewhat similar to this premise and if you can look at it that way then you may just like it more than me. I did not hate but I did not love it yet I did understand it for the most part but yes I still wanted to know more but I guess in the end I must let go.

Edgerton does a nice job of leading the film with Ejogo there to support him but it is Harrison Jr. that takes the audience on the journey of fear, trust, pain, sorrow and the feelings of what if! Abbott enters into the scene soon and brings a sense of intrigue and the question of trust with Keough and Faulkner there to support him as well. It is Mikey though that adds the element of surprise and open ended questions as the plot thickens. It is a nice little cast of characters but I’m not sure I would classify this film as horror but maybe more so a mystery thriller that will probably be available on DVD soon.

More in this category: « Wonder Woman My Cousin Rachel »
back to top

We have 277 guests and no members online