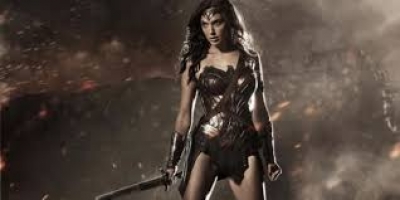 While working at the Louvre, Diana Price (Gal Gadot) receives an old photograph of Wonder Woman (Gal Gadot) with Steve Trevor (Chris Pine), Sameer (Said Taghmaoui), Chief (Eugene Brave Rock) and Charlie (Ewen Bremner) from Mr. Bruce Wayne which prompts her to tell her story about how Wonder Woman came to be within the human world. Raised among the Amazon women a young Diana, daughter of Zeus and Queen Hippolyta (Connie Nielsen) had always wanted to be a warrior so her Aunt General Antiope (Robin Wright) taught her how to be the fiercest warrior of any woman in her world. There was one thing though that Diana did not know and that was that as she grew older her powers increased and the chances of Aries, the God of War, might find her and try to destroy her. You see Zeus created humans to live in an outside world, Aries killed the Gods and created war and hate due to jealousy of mankind and the Amazon women were there for love and kindness.

When a British soldier named Steve Trevor breaks through a barrier causing him to crash land in the waters offshore of the island of the Amazon women Diana spots that he is in trouble and swims out to save him but little did she know that this act of bravery would open the world to German fighters causing a war on their own shore. Steve informs Queen Hippolyta of the Great War within the human world and the carnage of millions of men, women and children. It is Diana that decides to return to the human world with sword, rope and shield, find Aries who she thinks is the cause, destroy him and bring peace once again to the human world. Arriving in London with Steve Trevor, a British spy, who happened to steal the diary of Doctor Poison (Elena Anaya) he and Diana discover that the doctor is creating under the graces of General Erich Ludendorff (Danny Huston) a gas that will instantly kill millions. Wonder Woman knows she must go to the front line find Aries and destroy him to save mankind but she doesn’t go alone since Steve, Charlie and Sameer join her on her journey upon which they later meet up with Chief. Back in London, Steve’s secretary Etta Candy (Lucy David) and Sir Patrick (David Thewlis) who both support Wonder Woman are holding down the operations from their office.

Wonder Woman becomes appalled by the effects of war and cannot understand why there must be war amongst mankind. She believes in the possibility that it is Aries who is the cause and it is her obligation to find him and destroy him in order to bring back humanity to the world. But even if she kills Aries, even if it is him that is feeding into this war story, by killing him will it stop the war? She believes so! In the end it is discovered that Steve can save the day but only Wonder Woman can save the world if you believe in love.

I had high expectations for this film and for the most part they were met thanks mostly to Gadot that is absolutely perfect as Wonder Woman. Great direction along with a complimenting story line this film should do well at the box office. At times though the film seems to throw in the empowerment of women over men which might scare away some conservative males but overall this film is sure to outdo its budget of one hundred and twenty million dollars. I did kind of feel that even though the story is laid out of who Wonder Woman is and how she came to be I still felt that 120 minutes would have been a perfect length for this DC film rather than 141 minutes. The costumes were well done and her attire was superb showing just enough and not too much. A great score and some haunting scenes of war mixed in with some beautiful landscapes help propel this story. I thought Pine does well in his leading role but felt that possibly I may have liked another actor more so than him since for some reason I kept seeing Captain Kirk at times. Thewlis performs well as does Nielsen, Wright and Anaya but it is David that tends to add a bit of needed levity at times. The boys even play well together, Bremner, Brave Rock and Taghmaoui and help to move the story line along. There are a number of animals used in the film but none more prominent than that of the horse. In the end this film proves justice for a woman in a league of her own.

More in this category: « Baywatch It Comes at Night »
back to top

We have 645 guests and no members online