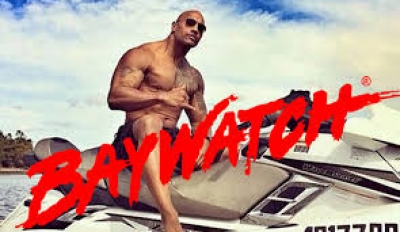 Lieutenant Mitch Buchannon (Dwayne Johnson) is pretty much known to everyone at Emerald Bay as a type of super-hero, saving lives is his middle name. Mitch patrols the beach on a daily basis with his team, CJ Parker (Kelly Rohrbach) the blonde bombshell and Stephanie Holden (Ilfenesh Kadera) beautiful, smart and always in control. It’s time for tryouts to add trainees to the Baywatch team and many have gathered to try out for the team, Summer Quinn (Alexandra Daddario) piercing eyes, smart and in top shape, Ronnie Greenbaum (Jon Bass) third time trying out, not in shape but a huge passion and love interest in CJ and last but not least pretty boy gold medalist Matt Brody (Zac Efron) who conflicts with Mitch from day one.

Once tryouts are done and Summer, Ronnie and Matt join the team, life for Mitch and his original team members encounters not only a rebellious and immature Matt to deal with, thanks to Captain Thorpe (Rob Huebel) but also that someone is dealing a massive amount of drugs in the Bay area. Suspects abound especially Victoria Leeds (Priyanka Chopra) who recently showed up in the Bay to open a new club but beyond that Victoria has several other plans and Mitch and his team are on the path to find the truth and bring justice to the Bay and the people who live there. Meanwhile the team is also dealing with everyday occurrences in the daily life of a lifeguard while clashing with local police when bodies show up and the plot thickens. No matter what comes their way from ball sacs to drag, fires and explosions nothing deters the team. In the end, fireworks explode as Mitch and the team does their best to save the Bay and expose the truth and all the criminals involved.

I went in to this screening with minimal expectations but was pleasantly surprised I actually liked it quite a bit. It has its cliché moments and predictability but there are strong moments of drama mixed in with some well-acted and written humor. A good soundtrack definitely accompanies many of the scenes whether on or off the beach. The conflicting relationship between Mitch and Matt definitely adds to a good storyline along with the escapades of Ronnie dealing with his new career and crush on CJ. Of course it may seem unrealistic but overall it’s a film to entertain and in my opinion it hit its target. Enjoy the eye candy everyone!

Johnson is always fantastic in his films and for such a big guy he can deliver strength of course but always is able to kick butt when it comes to comedy as well. He plays very well with a newly chiseled Efron one reason to see this film on the big screen. Efron has come a long way as an actor still a pretty boy but he works it well. Bass who I am unaware of as an actor hits a home run as the funny man in this story whether dealing with his private parts or dancing to impress he brings on levity and a sense of charm for the unfit lifeguard. Rohrbach, Hadera and Daddario are all of that to look at in their swimwear but they can actually act as well. Chopra may be a bit of the weakest link being the main suspect to the story. Besides some other supporting actors and extras it was refreshing to see cameos by David Hasselhoff and Pamela Anderson. A good summer movie with a lot of T&A, bad language, nudity, laughs, action and drama to keep you intrigued for two hours although for some that take it for more than what it is the film could be offensive.

More in this category: « Pirates of the Caribbean: Dead Men Tell No Tales Wonder Woman »
back to top

We have 199 guests and no members online