Pirates of the Caribbean: Dead Men Tell No Tales Featured 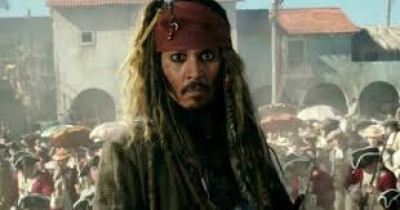 Pirates of the Caribbean: Dead Men Tell No Tales

As a young Henry Turner seeks out his father under the depths of the sea he comes face to face with him cursed aboard the sunken Flying Dutchman. The only way his father could return to him in life would be to break the curse bestowed upon the ship and its men and the one person that could help is Captain Jack Sparrow (Johnny Depp). Nine years later, an older Henry Turner (Brenton Thwaites) is aboard the British Red Coats ship when it enters into the Devil’s Triangle. Henry the only survivor later returns to St. Martin with a message from a very dead Captain Salazar (Javier Bardem) for Captain Jack Sparrow.

Back on the island of St. Martin, Henry is arrested for Treason, Carina Smyth (Kaya Scodelario) is to be hung as a witch and well Sparrow is about to rob a bank with his old crew. Things just don’t go exactly as planned for any of the three yet when Sparrow decides to trade his compass for a bottle of alcohol at the pub the earth moves and Salazar and his dead crew are released from the Devil’s Triangle. Grant it they are still all dead but now they intend to destroy every ship on the ocean including Sparrow and his Dying Gull. It turns out that everyone involved including Captain Hector Barbossa and his crew has one thing in common which is to find the Trident of Poseidon and rule the oceans.

Once Henry finds Sparrow and informs him of the message from Captain Salazar, he, Henry and Carina band together avoiding the chance to be hung or lose a head by the guillotine. Captain Salazar has captured Captain Barbossa threatening him to find Sparrow or death will come to him and his men but Barbossa has other plans in mind since Salazar and his dead men cannot step on land but only live within the water. Soon the Black Pearl is resurrected and Jack Sparrow, Hector Barbossa, Carina. Henry and all of their crew set sail. Along her journey Carina follows the stars and her diary in hopes of one day finding out who her father is. They soon stumble onto a deserted island where they walk among the stars and soon thereafter within the sea to search for the Trident before Salazar gets it first. In the end the truth comes out, apologies are accepted, reunions are born and Captain Jack Sparrow is once again on deck to follow the stars to his next rendezvous. Remember to stay to the very end of the credits so as not to miss the next journey within “The Pirates of the Caribbean”.

Sadly I don’t remember to much of the other four pirate movies with Depp but obviously it does not matter so much with this film since the writers did an excellent job of keeping this film self-contained and standing alone on its own understandable and relevant story line. A great score with superb costumes and phenomenal cinematography helps to make this superbly directed film come to life for all to see and enjoy. There are animals abound throughout the story from parrots, dead birds and sharks to a very cute but cunning monkey. Make sure to watch for the cameo role of Sir Paul McCarthy as Uncle Jack along with Orlando Bloom as Will Turner and Keira Knightley as Elizabeth Swann. It goes to show that even if so many of the pirates in this film are dead the franchise has not lived out its life quite yet.

Depp once again is superb as Captain Jack Sparrow whether drunk or sober he knows how to steal a scene. Bardem was the perfect bad dead pirate out for revenge against Sparrow and whether dead or alive he was truly intense. Rush as always knows how to carry a film and this time does so by keeping secrets. Thwaites and Scodelario both complimented each other and really did great jobs helping to lead this story into a highly predicted weekend box office and thereafter. As for the crew of the ships that supported this story and some of the extras and cameo appearances hands down this was an enjoyable film that should perform well domestically and beyond.

More in this category: « Alien: Covenant Baywatch »
back to top

We have 361 guests and no members online