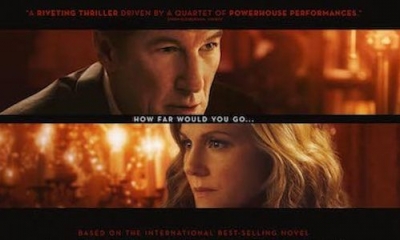 In the beginning I was a bit unsure of what was happening but of course it all comes together shortly thereafter. Claire Lohman (Laura Linney) a sweet and very protective mother of her son Michael (Charlie Plummer) is married to Paul (Steve Coogan) a very unhappy and one might say mentally challenged individual, public school teacher, that is obsessed with the history of Gettysburg and not exactly socially compatible with Michael. Claire and Paul are getting ready for an evening out to an extremely elite dinner with his brother Stan Lohman (Richard Gere) a politician and his current wife Katelyn Lohman (Rebecca Hall), his past wife and mother of his two boys Rick (Seamus Davey-Fitzpatrick) and Beau (Miles J. Harvey) was Barbara (Chloe Sevigny).

Once at the restaurant all is not so copacetic between the four family members. Paul seems to complain about everything at dinner as well as the fact of Michael dating Anna (Laura Hajek) a twenty year old smoker with a car. Yet the other three have not shared some knowledge with Paul but rather have kept in the dark about a brutal act their children both Paul’s and Stan’s have committed on a homeless person (Onika Day). For the rest of the night with flashbacks of what the kids did that night we as an audience sit through every course of the meal listening to the news being broke to Paul, the fact that Stan will not run for a higher office, Claire wants to protect her children as does stepmom Katelyn and not tell a soul and during all this time you ask yourself, what would you do if they were your children.

As the night goes on in the restaurant between some high tempers, annoying wait staff, elite food dishes and the power of choices, all four parents are caught between a rock and a hard place on what to do and they are not totally agreeing on the decisions. Yet when Beau takes matters into his own hands the challenges of life get even more complicated causing one parent to step off the edge to prove his love for his child, leaving you the audience with the decision to make your own choice as well.

In the beginning I was not sure if I was going to enjoy this story which challenges your own choices in life between what is right and what is wrong especially when dealing with your own flesh and blood. As the story moves forward I found myself a bit more intrigued especially since I was able to follow the writing a bit more. It’s definitely not a big budget film except for maybe some of the exceptional cast members like Linney, Coogan and Gere. I was truly not a fan of the ending and some of the photography along with some jumpy writing but overall the direction is pretty good and the overall story itself leads you to think about life, love, choices and family. It was a good cast and for the most part well-acted especially by the three above mentioned stars but in the end I’m not sure it would be a movie I’d go to see over some of the other films in the theater right now although it may be a good story to eventually watch from your own home as I just did. The film has an audience but I wonder if they will make it to the theater to support it. I think it’s a fifty fifty shot based on the three head liners that carry this story from beginning to end.

More in this category: « Free Fire Guardians of the Galaxy Vol. 2 »
back to top

We have 604 guests and no members online