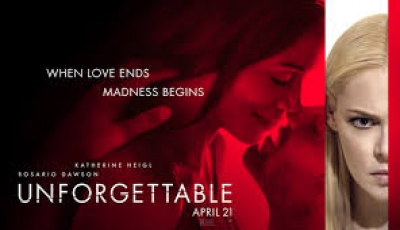 Like so many other films before this one the story starts at the end before the beginning. Six months earlier Julia Banks (Rosario Dawson) is leaving her friends, work at Chapter Pad and her crazy ex-boyfriend Michael Vargas (Simon Kassianides) to live outside San Francisco, work from home and marry David Connover (Geoff Stults). When she arrives at her new home with David little did she know what she was getting into with his ex-wife Tessa (Katherine Heigl). Tessa is miss perfect and tries everything within her powers to make sure her daughter Lily (Isabella Kai Rice) is perfect as well. The leaf does not fall far from the tree when you get to meet Tessa’s mother (Cheryl Ladd), you’ll understand where crazy came from in their household.

It’s a small town and everyone knows Tessa Connover and not to long afterwards they are beginning to know Julia as well. Apparently Tessa never got over David and shortly after a party for the opening of his new business, Copper Mountain Brewery; she found a way to get rid of Julia. Oh isn’t technology such a wonderful thing, you can find out anything about anyone in no time at all. Julia begins to receive unknown phone calls, flowers with no name attached to the card, and the crazy ex-boyfriend has resurrected, not to mention personal items disappearing with no explanation at all. It gets to the point that Tessa doesn’t want Julia alone with her daughter because Julia is falling apart and David although deeply in love with her begins to become aware of the happenings. Thanks to Tessa of course!

Meanwhile Julia is finally beginning to catch on about her crazy ex and psycho Barbie but is it too late for Julia to convince David that Tessa is framing her. In a moment straight out of a scene between Alexis and Crystal Carrington in the hit television show Dynasty a battle between Tessa and Julia breaks out but the question is which woman is standing in the end. Six months later a new home and a new dog but ding dong who’s at the front door?

The movie is by no means horrible especially if you like the Lifetime Channel on cable television. Between the writing which isn’t bad nor is it original and the so so direction that tells you everything that’s going to happen before it happens there are really no big surprises around any corner of this cliché story line. Dawson is pretty much the best part of the film. Heigl is better off in comedy although she plays a Stepford wife pretty well even without wearing the white jacket that ties in the back. Stults is attractive but his acting seems a step up from a commercial actor trying to convince you to buy his beer. Kassianides and his brief moments on screen are more forgettable than unforgettable yet Kai Rice seems to hold her own weight pretty well. I had the pleasure years back to spend a week in Hawaii with Cheryl Ladd and her family but my comment is not based on that fact besides looking like she has had some work done it was good to see her back on the screen even for a small role as the evil granny. Overall this story has its moments but very far and in between so even though it’s titled “Unforgettable” it still stands at a bit forgettable!

More in this category: « The Promise Free Fire »
back to top