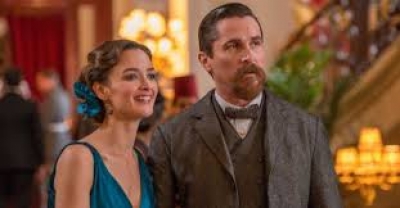 Review written by Jillyn Sidlo with 4 out of 4 paws

Let me start by saying EPIC FILM! I was completely captured from the
moment it started. The Promise is sure to triumph in Hollywood
come Oscars Time! This heart felt love triangle weaves its way through
the tragic genocide of the Armenian empire falling. Taking place in
1915-1922 it began a 100 years of modern genocide launching the world
into a cycle of violence and denial resulting in millions of lives lost
and entire people groups destroyed.

Profoundly Written and Directed by Terry George the story unfolds of a
brilliant medical student Michael played by Oscar Isasc,  who meets Anna
played by Charlotte Le Bon in Constantanoble while attending school.
Their shared Armenian heritage beautifully unfolds from friendship into
explosive romance that shakes up the foundation of his family as he is
promised to another and she is sharply involved with an American Photo
journalist Chris played by Christian Bale...who is dedicated to
exposing the political truth of this senseless war.

In these trouble times of war between the Turks and Armenian's the
heartbreaking truth is told as you witness the crimes of mad men and
their power struggles attempt to destroy an entire people.
This film displays the hard reality of family strength and unity,
government misplaced over power and love won and lost yet in the
end the people stand together and strong in their beliefs and religious
values.

As quoted in the film:
'INJUSTICE IS ONLY ENABLED BY SILENCE'
1.5 MILLION VICTIMS AND 450,000 SURVIVORS

I believe the social impact of this film will be awe inspiring and a
true eye opener to the world that turns a blind eye to such tragic
happenings.
The movie score written by Chris Cornell is so eloquently attached to
each scene in the film that it will leave you needing to catch your
next breath.
I give this film a definite standing ovation of 4 PAWS
A MUST SEE!

More in this category: « The Fate of the Furious Unforgettable »
back to top

We have 438 guests and no members online