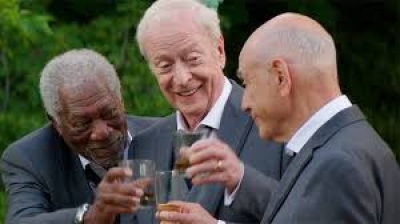 Joe (Michael Caine) lives in New York with his daughter and granddaughter Brooklyn (Joey King) in a very comfortable home, for the meantime. You see, Joe just got a yellow slip from his bank stating the fact that his mortgage is delinquent. A trip down to his bank WSB he meets with the bank manager, Chuck Lofton (Josh Pais), about his mortgage situation. Of course the bank does not care and warns Joe that once he receives the red notice afterwards in 30 days thereafter the home belongs to the bank. Yes this ticks me off, doesn’t big brother Wall Street have enough of our money so they need more and what about the hard working families that have worked so hard for a roof over their heads? Yes this story will have you wanting to rob your bank as well! Anyway enough of my ranting! While Joe is in the bank three robbers enter and minutes later leave, a smooth getaway with very little clues except for a small conversation between one robber and Joe.

Willie (Morgan Freeman) is suffering from renal failure and without a new kidney he has little time to live. As for living he rooms with Albert (Alan Arkin) for twenty five years now. That’s a true friendship! All three men are best friends and when they find out that their company is closing in America and moving to Vietnam and their life long pensions are lost the guys soon become desperate to survive not only for themselves but their families as well. So one day after some heavy thinking Joe decides to devise a plan to rob a bank but not all three men agree. Actually they first try to rob Value Town their local grocery store but that doesn’t go so well, although Albert finds a new girlfriend, Annie (Ann Margret). Joe knows he needs advice from a low life so he seeks out his ex-son-in-law Murphy (Peter Serafinowicz) who eventually leads them to Jesus (John Ortiz) owner of Cameo Pet Store and rescue. How appropriate, a bad guy running a pet store that’s actually a nice guy who helps out three old men with lessons on robbing a bank.

The men devise a plan and actually rob the bank but due to a slight slip up become suspects thanks to one little girl and Officer Hammer (Matt Dillon). In the end, a rescue pug finds a home and in our culture we discover it is our duty to take care of the elderly. Oh what a difference a day makes!

The story is a reboot from the seventies but being so long ago it is definitely new to this generation. It is well written and well directed with some funny scenes and lines but it seems to play a straight line with not enough curves at least in the directing department. I did appreciate the story line though which of course upsets me especially since like so many of us are victims of the system. The rich get richer by using the people that have made them rich and the foundations they control are built on greed and lack of ethics and compassion. Maybe life would be a better place if all people were able to share in the wealth equally or at least within limits of their own capabilities in life. The roof can only go so high before it eventually collapses. Oh I could go on forever here especially after what entered in the White House this year. Strike one, strike two and upon that third strike you’re out, I think America tried to do the right thing but this White House player struck out years ago.

Freeman, Caine and Arkin all do a phenomenal job with their roles, Freeman the soft side, Caine the brains and Arkin the pessimist. Christopher Lloyd even has a role albeit a bit crazy but it helps to add a little more humor to the story line. King, Siobhan Fallon Hogan as Mitzi, Ann Margret, Ortiz, Dillon all add to the story pushing the older gentleman along but overall it still seems to move a bit slow yet enjoyable. I’m not recommending that anyone should rob a bank but one voice can at least help in making a difference if we wish to move forward as one people. Yes this film obviously brought out the discourse I have for the way some corporations treat both young and old in this great country of ours. Love the fact that this movie had numerous pets and their topics of animal welfare especially when Jesus makes an opinion on how so many people mistreat animals in America and beyond.

More in this category: « Wilson Gifted »
back to top