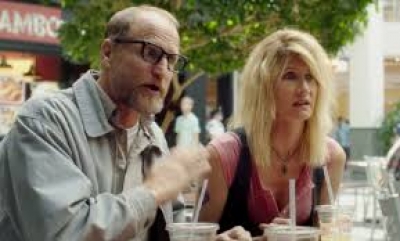 Wilson (Woody Harrelson) is an older man, living alone, well except for his dog Pepper, with only two friends in the world, Robert (Brett Gelman) and Jodie (Mary Lynn Rajskub) well that is until they decide to move to St. Louis to get away from crazy Wilson. No one wants to be around him since he is quite neurotic with no filter at all when it comes to his opinion. He learns his father is dying of terminal cancer and travels to see him before his last breath, leaving Pepper with pet sitter Shelly (Judy Greer). After the death of his father he tries to open up to people but no one will listen since for the most part they have no idea who he is. He is quite strange even the butch and very odd woman in The Pet Boutique wants nothing to do with him.

When he finds out the whereabouts of his ex, Pippi (Laura Dern), who apparently used to be a crack whore on the streets he learns not only has she cleaned herself up but that seventeen years ago she gave up her baby daughter, Wilson’s child, for adoption. Finally Wilson feels like he has purpose and after his reunion with Pippi he convinces her to seek out their daughter. When they find Claire (Isabella Amara) she is not the beauty they expected hence Wilson and his mouth does a nice job of saying so but it’s not the first time she has heard this, she’s not exactly the popular girl in private school. Claire lives with her new parents in suburbia, nice big house, nice clothes, nice everything basically, except Claire does not fit the criteria.

When Claire meets her real parents Wilson and Pippi they try to get to know each other meanwhile not making it aware to her adoptive parents. Later a road trip to Pippi’s sister Polly’s (Cheryl Hines) house to visit her family and show of Claire leads into more trouble which eventually ends up of 36 months jail time for Wilson. When he gets released Wilson discovers the world has changed and he has grown up. When he goes back to fetch Pepper what he got was Shelly instead. In the end, Wilson discovers he has made a difference and he will be remembered and that sometimes it’s what is right in front of us that matters but we just can’t always see it.

The film drags quite a bit and I attribute that to some pretty choppy direction. The writing is well done for the most part but the comedic moments I believe get lost due to the direction. It’s a dark kind of comedy with some dry humor that will make you chuckle but don’t expect any laugh out loud moments, disappointing since I thought this was going to be a home run. It’s a bit more like first base only! Actually one of my biggest laughs was when my friend David visiting from New Jersey fell asleep and began to snore. Not a great score or wardrobe and if it wasn’t for the animal moments in the story I don’t think I would have liked it much at all. There are some good messages throughout his need for anger management but they are somewhat far and in between.

Being a fan of Harrelson and Dern I was hoping for something that I did not get. Harrelson does a nice job of keeping his character interesting but the lack of bells and whistles does not help his plight for funnier content. Dern is a great accomplice but she too seemed to get lost in the translation. Amara could have hit her mark a bit better and Hines was almost there but once again lost it to direction. The supporting characters helped especially Greer but ultimately this is a slow moving comedy that missed its chance at a home run or at least third base rather than a first base hit. One truth though, in life the older I get the more I’m beginning to understand Wilson!

More in this category: « Life Going in Style »
back to top