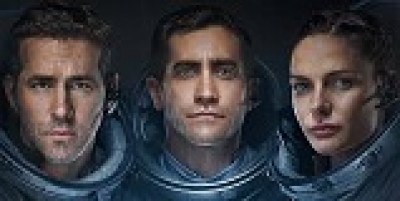 A small crew of scientists, David Jordan (Jake Gyllenhaal), Roy Adams (Ryan Reynolds), Kat (Olga Dihovichnaya), Hugh Derry (Ariyon Bakare), Sho Kendo (Hiroyuki Sanada) lead by Miranda North (Rebecca Ferguson) aboard the ISS for the Mars Pilgrim 7 Mission has discovered life beyond earth. It appears that a single-celled organism discovered from Mars has become their center of attention and the people on earth could not be more intrigued, so much so that in a school contest to name the alien life form the winner was Calvin. As Hugh conducts his studies on Calvin he notices that the organism’s curiosity out-weighs its fear. It’s been noted by the rest of the crew that at all time caution should be used since Calvin has begun to grow but when Hugh gets a bit too intrigued with Calvin the creature soon takes control causing the research lab to be sealed. In an attempt to save Hugh after Calvin escapes its enclosure the crew discovers that this alien life force is much smarter than they could imagine.

It ends up after one member of the crew is killed Calvin has found a way out into the entire ship and with a need for food and water it needs its life support. In a fight for survival way above the earth’s atmosphere the remaining crew has lost contact with earth and Calvin is growing at a rapid pace. The crew determines that Calvin does not hate them but he has to kill them in order to survive by any means possible. In a fight for life both Calvin and the remaining crew are trying to figure out ways to survive but in the bigger picture floating above earth the crew knows they must stop Calvin before the station re-enters the earth’s atmosphere. If Calvin survives the re-entry it could mean the end for life on earth. In an attempt to bump Calvin into deep space the remaining crew devises a plan. The question is though will it work and will any of them including Calvin survive?

The story is extremely well written with some fairly good character development in the beginning of the story. Once the action kicks in there is no time for story telling but rather some great direction as the crew on ISS fight to stay alive. The cinematography is outstanding of course with some great special effects that will literally have you sitting on the edge of your seats wondering what will happen next in a location where literally no one will hear you scream. An intense score along with several twists during the story adds to the suspense and intrigue of the plot. Obviously this story will continue, it even had several critics pulling at straws in a debate but I have my own theory of which I can’t say since it would give too much away in this time of monsters hitting the big screen.

The actors were all top choice with Ferguson and Gyllenhaal leading the way. Both of these actors are outstanding in this film although I must say Gyllenhaal at times had some weird facial expressions. Reynolds is his usual quirky self, bringing some levity at times to some intense moments. Dihovichnaya is a great support who helps to bring those intense moments and Bakare who plays a cripple is inspiring as is the family man character that Sanada portrays. The film really centers around these six characters and Calvin of course but there are a few small roles that add to the story line. If you’re looking for a thrill ride in outer space where there is literally nowhere to run than you should definitely shuttle yourself to a theater near you on opening weekend. It’s worth it!

More in this category: « Beauty and the Beast Wilson »
back to top

We have 310 guests and no members online