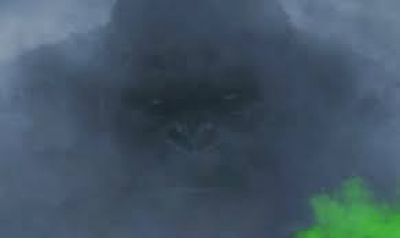 The year is 1944, two men fall out of the sky, one is American and the other Japanese, no joke its war time and as they run through the jungle of the island they landed on what they encounter together is beyond any human to human combat. Twenty nine years later, Bill Randa (John Goodman) from Monarch and Geologist Houston Brooks (Corey Hawkins) show up in D.C. to meet with Senator Willis (Richard Jenkins) over a private matter. Randa makes a statement, “There will never be a more screwed up time in Washington” but oh just wait until 2017 its Nixon and worse. Both men convince the government to allow them to enter into an uncharted island that they discovered on satellite but they need the assistance of the military. Once they convince the Senator the Russians are not far behind they get their clearance.

They assemble a group of military personnel, Mills (Jason Mitchell), Cole (Shea Whigham), Slivko (Thomas Mann), Reles (Eugene Cordero), Jack Chapman (Toby Kebbell) and several others led by Captain Preston Packard (Samuel L. Jackson) along with a British Special Forces Tracker, James Conrad (Tom Hiddleston), Photographer Mason Weaver (Brie Larson), Landstat employees Victor Nieves (John Ortiz), Steve (Marc Evan Jackson) and San (Tian Jing) a Biologist. They travel most of the way by ship and partially by a number of helicopters in route on a mapping expedition, so they think! When they break the storm wall and enter Skull Island what they find is true beauty that is until absolute carnage takes over killing many of the military forces. Monsters do exist and they happen to be on Skull Island, not just Kong but many other surprises along the way.

No helicopters to fly out and danger at every footstep the remaining people are on a journey of survival to make it to the other side of the island in hopes of a rescue. Most of the survivors are split up, scattered all over the island yet for some they come upon some villagers, most of whom I thought could have been cast a little better, with one American among the group, Hank Marlow (John C. Reilly)who tries to help the strangers find their way out along with himself. One major problem for them especially Packard is Kong, he swears revenge on the King but the other more viable issue are the Skull Crawlers, now these ungodly creatures have no mercy at all. Why are the most dangerous places the most beautiful? I can answer that it’s because humans have not been there to destroy and screw it up. I could say much harsher words but use your imagination on what I really am saying about man’s stupidity! Albeit sit back enjoy a nice cold drink and hot dog and get ready for one awesome ride back in time.

The film is great, nice direction and writing although some of the levity goes astray at times. The main player here is the CGI and beautiful cinematography. A great score and some phenomenal surprises and run for your life Jurassic-like sequences make this movie definitely worth seeing. I will say that some of the wide shots of Kong seemed a bit to man like than ape but other than that all else is exciting, fun and full of twists and turns, many that are unexpected. This is a film though that I wish I could have reviewed in 3D since I think with all the action and array of monsters it would have played well. In the end, make sure you stay until the final credits or else you will miss some very important facts that need to be seen.

I did like the casting which I thought was very well done. Hiddleston is easy on the eyes for the women and he plays the warrior slash savior role quite well. Jackson and his crazy eyes kick some serious standalone moments. Larson is perfect as the beauty to her beast. Reilly although comes in a bit later in the story kicks some major butt and takes away the golden monkey for the best character. Goodman plays it straight as does Hawkins and Jing but the levity man Ortiz could have been the only character that I can truly pick apart as a miscast. As for the supporting characters they all help move the story along giving their all to kick some serious big screen monster ass. Loved it and would sit through it again but only this time with a bucket of popcorn rather than a pen and notebook.

More in this category: « Table 19 Beauty and the Beast »
back to top