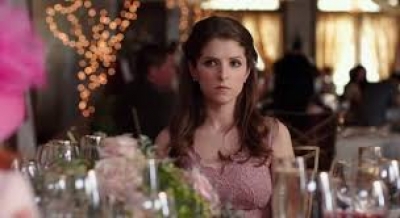 Personally I think weddings are kind of fun well unless you’re sitting at the reject table close to the bathrooms, in this case Table 19. Eloise McGarry (Anna Kendrick) was supposed to be the Maid of Honor at her oldest friend’s wedding, Francie Millner (Rya Meyers) but when her brother Teddy (Wyatt Russell) dumped Eloise via text after two years together to date Nicole (Amanda Crew) Eloise dropped out as the Maid of Honor. She had no intention of attending the wedding since she did not want to see Teddy but when the invitation arrived she ultimately decided to go.

She tried to avoid Teddy when she arrived but we all know that is a difficult task when you’re at a small wedding reception out in the country. Ironically Eloise meets a good looking stranger in the lobby, Huck (Thomas Cocquerel), but he too has his own issues to deal with in life but for a short yet predictably odd time he is a distraction. The fun begins though when Table 19 begins to assemble, Walter Thimple (Stephen Merchant) cousin of the bride and a very strange and convicted man, Bina (Lisa Kudrow) and Jerry Kepp (Craig Robinson) an interracial couple that own a diner in Central Ohio whom may have lost their loving feeling, Rezno Eckberg (Tony Revolori) a young mama’s boy with a large penis that hopes he’ll get lucky with the single ladies and Jo Flanagan (June Squibb) who used to be Francie and Teddy’s nanny when they were kids, her date is her dog. As the wedding continues so do the gang of characters at Table 19 as they begin to bond and forge a relationship that not one of them really ever expected. Sometimes in life the odd ones out are usually the most interesting! Each of them have a secret and as the night continues each of their personal lives get revealed including that of Eloise.

Yet in the end in what resembles a story from the 80’s when Molly Ringwald was the princess of romance and comedy, accompanied by the ever so awesome 80’s music this story of forgiveness and love however so light brings a happy ending to everyone especially to a boy named Joe.

I enjoyed the film and the story was an ever so light approach I thought towards the old 80’s movies but it did not quite achieve that success. The direction is good and the writing appropriate but it is the cast of characters that help make this story cute and relatable to some extent. Kendrick is perfect; Kudrow has aged but definitely gracefully and works well alongside her on screen husband played by Robinson. Revolori has his moments but he’s no Jon Cryer for sure. Russell plays dense well but in the end proves he can be a man. Squibb is one of the best parts of the film and Merchant comes close to that as well. The writers develop the characters well but there just seems to be a slight chemistry missing among the group and as for Cocquerel I knew right from the start his story but it didn’t do much to help the plot. Overall it’s a cute film for date night or girl’s night out that does not hit its highest mark but at least it has developed characters, great music and an adorable dog that reminds me a bit of Benji.

More in this category: « A United Kingdom Kong: Skull Island »
back to top