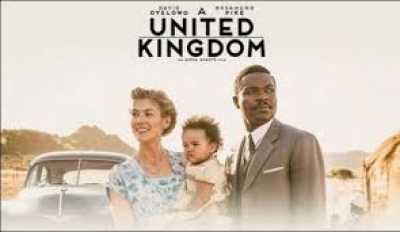 A young boy left his homeland of Bechuanaland, now known as Botswana, to seek an education in London in the year 1947, heir to be King of his country Seretse Khama (David Oyelowo) knew one day he would return to his land a man. Little though did he realize that he would meet Ruth Williams (Rosamund Pike) at a social mixer, court her and one day marry her. She knew that her father George (Nicholas Lyndhurst) and mother Dot (Anastasia Hille) would not agree of her relationship with a black man but thankfully at the time she had the support of her sister Muriel (Laura Carmichael). Seretse fears how his family will take the news of bringing a white woman back to his homeland to be Queen and he wonders if Ruth will be able to transition to Africa versus her life in London.

The press was all over the story of a black heir to be King marrying an office girl from London who would be Queen, breaking the life time tradition of his family before him. His uncle Tshekedi Khama (Vusi Kunene) as well as his wife Ella (Abena Ayivor) and Serente’s sister Naledi (Terry Pheto) did not take to the news well. A matter of fact it caused a break up among Seretse and his uncle which led to governmental turmoil in England and in South Africa. It seems everyone wants for Seretse to denounce his rights to the throne. Would England allow a Negro King in their lands most say no! So why should a white Queen be allowed in Africa. When Seretse approaches his people on his own soil and tells them of his love for Ruth and that moving forward they must omit segregation and stand for equality of blacks and whites his people accepted Seretse to be their new King. This angered his Uncle as well as the British government especially Alistair Canning (Jack Davenport) who spoke on behalf of the British empire to Africa.

How long before the dust gets in her eyes before she decides to leave? That is a statement that many may have thought but Canning stated as potential fact. Amazing how politics always play in behalf of control and greed over a country that the British do not own but obviously needs for their own selfish good. When Seretse begins to see evidence of Allied American Mining Corporation on his lands and without his permission does he know he must act fast to get his new marriage accepted by all. He flies to London to meet with dignitaries about his current status in Bechuanaland but he never thought he would be exiled for five years from his country by the British. When he breaks the news to Ruth about him not coming back she also has breaking news for him. Seretse later thought he would have the support of Churchill on his side but what he thought would be great news ended up being worse that is until he found legal assistance and more people on his side than he could imagine. The truth will set you free and when he is furnished with some hidden documents this truth was what he needed to get England and South Africa out of his way to create a democratic country and the mineral rights to his own lands. Seretse, Ruth, his Uncle and the family all played critical roles creating an independent country known in 1966 as Botswana, a new Africa and a continual lineage of the Khama throne. No man is free if not a master of himself!

I loved this film which it seems lately interracial couples are being focused upon in old and new subjects for the big screen. When the film started I sat in front of a group of older black friends and family and when they continued to chatter through the beginning of the film I turn around and asked them to be quiet since I needed to pay attention to the dialogue. The older gentleman leaned in and asked if I was writing about the film in which I stated yes as a critic along with the other members in my row. He and his friends from that time on where mostly quiet for the almost two hours. I have to say I really appreciated this film, the story told and the topic of standing up for your rights to marry who you feel fit to marry. I also must say I was delighted to hear the older generation behind me make a few comments of the injustice cast upon this interracial couple, Seretse and Ruth. What I’m saying is that sometimes older people, older than me can be set in their old ways and viewpoints but the people sitting behind me had the same responses and views that I did, that injustice to any person black, white or whatever color your skin may be is a crime and sadly to this day both black and white groups are still guilty of racism and in this current election in America it looks more that way than ever. Rather than healing a world and growing together as one people this current administration seems to be dividing us, creating a mixture of hate and injustice. Happily the older gentleman behind me and I shook hands at the close of the film which made me feel thankful to meet someone with the same views as I even though our ages and skin are different. We do need government in order to keep the world safe but we don’t need a government that dictates to all mankind creating diversity among all people and if that is what is created than current government should not be the voice for all people in our country once known as land of the free where all people are created equal. This film will bring so many thoughts and emotions out of the audience and hopefully make people understand that racism was wrong then, is now and forever will not be tolerated. A great score with some beautiful photography throughout Africa this film may not make a lot of money at the box office but if it helps to change one mind for the betterment of all people than it has served its purpose because that one person could someday be President. Oyelowo is outstanding, both he and Pike control this story but the supporting cast and that of the hundreds of extras bring this true story to life on the big screen where I hope people will go to see it especially since it reflects so many injustices that still exist in this modern age.

We have 770 guests and no members online