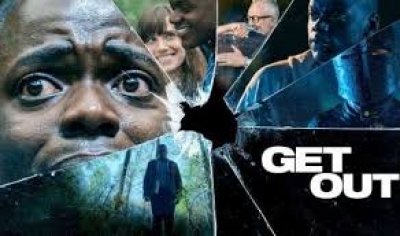 Rose (Allison Williams) and Chris (Daniel Kaluuya) are an interracial couple, she’s white and he’s black and after dating for a few months Rose thinks it’s time for Chris to meet her parents. He worries that her parents might have an issue with the fact that he’s black in which she responds that if her father could he would have voted for Obama a third term. The story has an interesting set up for dealing with interracial subjects among a few other hot buttons at this time.

Her father Dean (Bradley Whitford) is a neurosurgeon and her mother Missy (Catherine Keener) an avid tea drinker is a therapist and quite good at hypnosis. When Chris and Rose arrive they are welcomed with open arms on the front porch while black servants Walter (Marcus Henderson) and Georgina (Betty Gabriel) look on. Chris is a prominent up and coming photographer and spends some time out on the property taking pictures but he begins to notice some odd behavior among the servants and the family including her brother (Caleb Landry Jones). Chris calls his best friend and TSA agent Rod (LilRel Howery) to inform him that things in the country are quite strange and even more so when more family and friends arrive for a party including a young black man who happens to be dating a much older white woman. Matters become even more troubling when he takes a picture of the young black man who happens to resemble a missing young man from months ago and the flash drives him a bit into a rage screaming at Chris to get out.

Chris tries to get out asking Rose to leave with him but when he realizes that he has been hypnotized he finds himself in a sunken place and unable to leave. What happens in this house thereafter is nothing but pure horror for Chris, leaving him to fight for his life as best he can against the influences of some crazy white people and the decision of life over love.

The story has a long set up but when it gets to the end it is quite climatic. Peele does a nice job of writing and directing this film leaving the best for last. A somewhat unfamiliar cast they all do justice to their roles but it is truly Kaluuya that carries this story from start to finish with some help from Williams of course. A nice scary score with some unexpected turns help to keep this film interesting for the first hour but it is the last half hour that really shines bright. Whitford and Keener are good side-kicks as is Jones who has a small role here yet Gabriel and Henderson help to add intrigue with Howery bringing some comedic relief. More suspenseful than funny and quite violent in the end this film reminds me of Invasion of the Body Snatchers meets The Stepford Wives including a few others making this film not as original as I would have hoped for from Peele. Albeit this film is worth seeing in the theater for all you mystery, horror fans out for an intriguing experience.

More in this category: « The Great Wall Rock Dog »
back to top