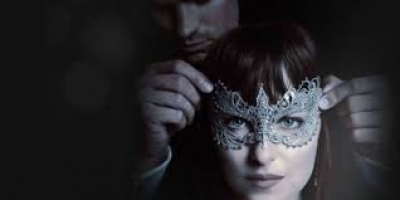 Universal Pictures and Perfect World Pictures present an R rated, 118 minute, Romance, Drama, directed by James Foley, screenplay by Niall Leonard and based on the novel by E.L. James with a theater release date of February 10, 2017.

The film opens with a young boy hiding under the kitchen table while a man with a cigarette reaches for him. Cut to present day Anastasia Steele (Dakota Johnson) is starting a new job as assistant to Jack Hyde (Eric Johnson) at SAP Publishing in Seattle Washington. That evening she is attending an art show for her friend Jose (Victor Rasuk) but what she did not know until she got there is that she was part of the art and an anonymous caller bought all six of her photographs. I wonder who that could have been. Wonder no more it was the dashingly handsome and wealthy billionaire did I say wealthy Christian Grey (Jamie Dornan). Next thing you know the two ex-lovers are having dinner together. Christian wants her back and is willing to negotiate terms. But is she ready? Oh course she is under new terms and no rules.

Later Anastasia encounters a young woman kind of ragged with a bandage on her wrist and this stranger knows Anastasia’s name! Meanwhile Christian is experiencing some jealousy over Anastasia’s new boss Jack. So what does a rich man do to protect his woman? No he doesn’t have the other man killed instead he buys the publishing company but not to the likes of Anastasia since she loves to work and wants to make it on her own without Christian’s help.

Of course throughout this film there is sex and more sex and more gadgets, some that even James Bond might not know how to operate but Christian does and he uses them with Anastasia’s permission of course. Actually this second film which is much better than the first tends to show a lot more than the first, if you get my drift. Later Anastasia finds out who the strange girl is and what her role was with Christian. A matter of fact Anastasia is having a bit of a hard time accepting some of the women in Christian’s past, not only the strange obsessed girl Leila (Bella Heathcote) but also Elena Lincoln (Kim Basinger) who happens to also be best friends with Christian’s mother Grace Trevelyan Grey (Marcia Gay Harden). Anastasia begins to question if Christian is looking at her as a relationship or ownership, a fine line between the two in his mind it seems.

It’s not until Jack makes a suggestive move on Anastasia does life for her take a turn for the better but not so much for Jack. The question here is if she wants to be smarter or richer! Maybe both since now Christian has decided to submit to her and continue the relationship closer than any other he has had in his past and for some of the natives they have become a bit restless. Yet Christian and Anastasia have the acceptance of the Grey family including his brother Elliot (Luke Grimes) and sister Mia (Rita Ora). A loving family along with Anastasia’s career and love life her relationship with Christian is superb. I was a and still am a big fan of the film “Working Girl” of which Dakota’s real life mother Melanie Griffith starred in many years ago and I absolutely appreciated hearing one famous line in this film from Dakota, “I never expect you to get me coffee unless you’re getting it for yourself”, a respectful line from a boss to their assistant at the work place I think. In the end, love is tested, the red room is once again active, Christian survives near death and through fireworks and flowers the answer is definitely still yes. Although lurking in the distance is mortal enemy number one who we shall be seeing in the next edition of Fifty Shades.

I absolutely loved this film and not just because I am a friend of Dakota’s family. The story is directed and written so much better than the last film. You really find yourself caring about the couple as well as a bit hot yet not so dirty during their sex scenes. Grant it you see a lot more of both Anastasia and Christian physically in this story but it is tastefully done for the most part although there are a few liberties taken here and there. The character development is better, the sex is better, the soundtrack sounds awesome and the overall appeal to the film is intriguing and suspenseful with some brilliant photography throughout.

Johnson and Dornan seemed to have become a bit more familiar with their bodies and for that fact their relationship together both in and out of clothes and it shows. Both of their roles were hands down better than the last film. Eric Johnson’s character you can tell from the start was a bit creepy and he played it well. Ora and Grimes do not have big scenes but they help to move things along even though they are not developed well as the siblings to Dornan’s character. Basinger as well does not have a huge part but it is meaningful and when Harden’s character gets in her face it reminded me of a moment from the TV series “Dynasty”. Overall I really enjoyed this hot and steamy sometimes raw romantic drama and look forward to the next one to come along hopefully sooner than this one did.

More in this category: « John Wick: Chapter 2 The Great Wall »
back to top