The Space Between Us Featured 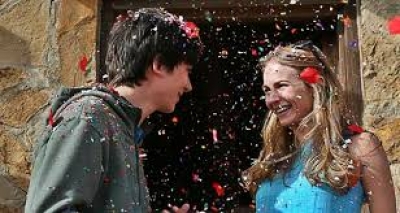 Nathaniel Shepherd (Gary Oldman) is a very wealthy man and owner of Genesis Space Technologies, the company behind NASA that has started to colonize Mars. He has decided to send six astronauts led by Sarah Elliot (Janet Montgomery) to Mars on a four year trip but when the crew was in flight Nathaniel, Director Chen (BD Wong) or for that matter no one bargained that there would actually be seven astronauts aboard the shuttle. It turns out that Sarah just happens to be pregnant and is due very close to their landing day on Mars. Courage is fear that has said its prayers. As for the Genesis Company they have decided to continue the mission and stay quiet about the pregnancy even though they are unsure if a baby could survive birth on Mars due to the differences in atmospheres.

Sometime later Sarah has a baby boy but not without complications. Sixteen years later the baby is now a grown boy named Gardner (Asa Butterfield) and surviving well on the red planet in their home they all refer to as East Texas. Gardner is super intelligent surrounded by scientist’s everyday but he longs to find his father on Earth one day. Meanwhile he keeps up with a pen pal on Earth, Tulsa (Britt Robertson), who is a bit of a rebel, living in one foster home after another, not liked at school but a beautiful ear for music. Gardner lies to her saying he can’t come to see her because he lives in New York and has a rare illness, little does she know he is on Mars.

Gardner of course has always wanted to visit Earth especially to meet his father whom he knows only from a picture but for Gardner since he was born on Mars his body would not survive the atmosphere on Earth. Kendra (Carla Gugino) who happens to be like a mother to Gardner along with scientists may have found a way for him to visit Earth 140,000,000 miles away. They did find a way and Gardner makes it to Earth but after complications develop he breaches his facility and everyone from Genesis and makes it out into the public where he first searches for Tulsa to help him find his father. Once Tulsa and Gardner meet there tends to be a chemistry which develops into romance but within their own inner feelings they are on the run from the law and Genesis. On a cross country journey in search of his father time is running out for Gardner and any option of life on Earth is fading but the relationship between he and Tulsa has grown tremendously and even though his time on Earth has come to a resolving end for everyone it is always good to be home.

I enjoyed this film but not as much as I had hoped. The first hour kind of drags along with not a lot of excitement or much to peak your interest well that’s after the first 15 minutes or so yet it does get better when Gardner meets Tulsa. The romance kicks in making the story a bit more interesting. I would think that a 16 year old boy and his first time on a new planet especially Earth which is vastly different he would be a bit more surprised by all the new wonders. I know in the story he watches some old films to help him become familiar but still I think a little more fascination would have helped the creative side of this story so I think the writers missed their mark here. As for the direction it is well done with a few exceptions although the cinematography at times throughout the film is amazing whether on Earth or Mars. The film has a good score with some lyrical songs mixed in but seeing that Tulsa loves to play a piano and sing it kind of went nowhere which I thought could of added a bit more to her and their romantic twist. Overall some of the special effects are well done but simple, making this film a step above a good made for television film. Albeit not to forget there are some very good made for TV movies! Either way it’s a sweet story that at times will bring tears to your eyes and laughter to your lips.

Butterfield does a nice job with the story yet sometimes I felt like he could have pushed his emotions more and his physical actions less yet overall he is a good up and comer in Hollywood. Robertson as well performs a nice job here but there are moments where I think the writers let her down. Oldman was superb adding a great twist to his character and Gugino is a nice support to Oldman but as a standalone did not stand out a lot. Montgomery is short lived but likeable as are Wong and Colin Egglesfield but in the end along with some supporting characters the film is a sweet love story with a mix of life as an alien so to speak. It looks like the dog, horse or even the caterpillar were not harmed in the making of this film but then again the use of more odd creatures in the story could have made for some funny moments that were otherwise missed.

More in this category: « Gold A Cure for Wellness »
back to top

We have 273 guests and no members online