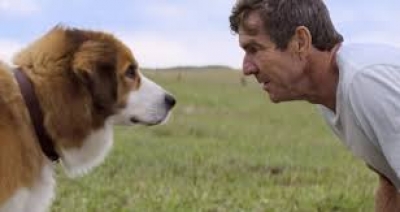 Review written by Jon Path with 3 out of 4 paws

What is the meaning of life? As this story begins a female dog gives birth to several puppies and as they grow old enough to play and run one is taken by a dog catcher never to see light of day again. Well not exactly an uplifting open but according to this story once you die you are reborn again into another litter of pups. As for a young pup that ran away from the likes of a puppy mill situation later to be picked up by garbage men and left to die in an overheated truck before a mother, Elizabeth (Juliet Rylance) and her young son Ethan (Bryce Gheisar) smash out the window to save him, this pup now named Bailey has a new home. Living a wonderful young life Bailey has grown into a wonderful adult dog and Ethan (K.J. Apa) is now playing football in high school. A boy and his dog, there is nothing more American than that and these two were best of friends. Bailey is wonderfully voiced by (Josh Gad) so at all times we get to hear exactly what Bailey is thinking, some good and some bad, some funny and some not so much.

Well life has a tendency to constantly change and when Ethan meets Hannah (Britt Robertson) for the first time life surely began to change for this boy and his dog. Bailey gets to experience a whole different kind of world now with a girl in Ethan’s life. His family life with his father Jim (Luke Kirby) has taken a turn for the worst and when a fellow student causes an accident, life for Ethan, his father, mother, Hannah and Bailey is never the same. Life for Ethan and Bailey is now spending more time with Grandpa Bill (Michael Bofshever) and Grandma Fran (Gabrielle Rose). Although later on in a heart breaking moment when Bailey takes his last breath he returns to yet another litter, this time growing up to be a police dog under the guidance of Officer Carlos (John Ortiz) but again in the end Ellie the police dog in Chicago meets her untimely faith.

Returning once again Bailey is born as a Corgi and later bought by a college student Maya Williams (Kirby Howell-Baptiste) who fed him all the wrong foods and spoiled him rotten and even when Maya eventually found herself a boyfriend who also had a dog this little Corgi had the time of his life. Life ends quickly for a dog not living as long as their human parents yet this time Bailey came back as a larger breed and adopted by a not so wealthy woman and her mean boyfriend. Left outside chained to a tree this dog was never played with or for that matter moved from beyond that tree that is until the boyfriend abandons the dog in a train yard. In search of a new home the dog begins to sense and smell familiar territory and eventually ends up on the old farm where he lived until his first dying day. Much to his surprise Ethan (Dennis Quaid) is still living there alone. Well that is until Buddy, which is the name Ethan gave him now, finds a way to bring two long lost loves together again and in turn prove to Ethan that although in a different body Bailey still lives within.

I loved this film and thought overall it was well directed and intelligently written. I absolutely loved the way the writers gave Bailey a voice throughout the film, never being too confusing with the other characters. The first hour is exceptional when Bailey is growing up with Ethan but once he passes on, the lives he comes back as tend to move too quickly not letting the audience able to become involved in the character’s development. Yet in the end the story brings closed doors yet creating opened windows making this film a must see by all animal lovers. I have heard of the video release incident with the shepherd and trying to get her to jump into raging waters which based on what I saw she was none too thrilled but it is to my understanding as in the credits it states that all animal actors are monitored by the AHA so I wonder how bad the incident truly was especially since you heard nothing about it until this film marks an opening day. I mean there are a lot of people close by and I know that too quickly when at times during the film I can tell that a trainer is close by.

The cast is nicely planned out and I thought they were all brilliant especially all 3 Ethan actors. Already a big fan of Quaid he does not disappoint nor does Lipton. Gad is perfect as the voice of the dogs and adds a touch of every emotional undertone to his voice which is that of the dogs. Overall with a wonderful supporting cast and extras it was the dogs that make this film what it is and giving them a voice made them even more worthy of watching on the big screen but make sure you bring your box of tissues because I guarantee you’ll need them. A dog’s purpose is to have fun, find someone to save, lick the ones you love and be here now. Life is a mystery but no longer for the boss dog.

More in this category: « Split Gold »
back to top

We have 515 guests and no members online