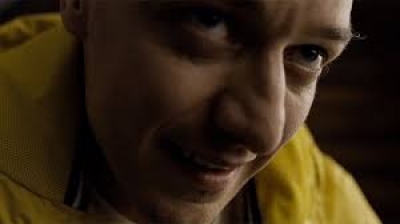 The story opens to a very intense moment in Philadelphia when three young girls, Casey Cooke (Anya Taylor-Joy) the odd girl of the group, Marcia (Jessica Sula) and Claire Benoit (Haley Lu Richardson) best friends, along with Claire’s father (Neal Huff) are leaving the mall. You never think what could happen from point A to point B until you’re faced with the reality of making that one important decision. In the case of these three young attractive girls it comes down to, should they run, can they run and basically will they make it? The answer is no!

Knocked out all three girls are taken to an undisclosed location where they eventually wake up locked in a room together. When the door opens standing in front of them is a man, the same man from the mall parking lot, his name is Dennis (James McAvoy). Throughout the time these girls are kept within this room, somewhat like a dungeon or old cellar yet with a very clean white bathroom, they in time meet not only Dennis but also Patricia, Hedwig, Barry, Kevin Wendell Crumb, as well as a cast of odd characters yet in the end it is The Beast they need to fear.

Barry likes to design women’s clothing and tends to bring sketches to show his therapist Dr. Karen Fletcher (Betty Buckley). They discuss Barry’s new job, his life, amongst many other topics. Knowing about his multiple personalities Karen likes to observe his actions until one day she decides to confront Barry with the question of whom she is actually having a conversation with at the time. Dennis seems to be the one in control with the help of Patricia but Karen has begun to realize how to see through him and into the person he really is. Yet something is wrong, something is beyond the norm in Barry’s life, different than his normal actions and behavior so she digs deeper into his mind. Karen knows that by observing Barry she can hopefully unlock the potential of the brain and the many personalities that may live within it.

Meanwhile back in captivity the girls are trying in any way possible to escape sometimes by trying to manipulate the many personalities of Dennis. Hedwig who is a nine year old boy seems to be the most vulnerable yet things for all three girls just don’t go as planned nor does it for Dr. Karen Fletcher. You never really know who walks amongst you from day to day nor the personality traits they hold within them as well. We get to look inside the childhood of Casey and the time spent with her father (Sebastian Arcelus) and her Uncle John (Brad William Henke) while on deer hunting expeditions. There are secrets within her young life that she has carried with her into adulthood, scars that are old and ones that have resurfaced due to her current situation being held captive. Casey is a pure heart, broken yet evolved with the power to be what she believes. A lesson learned through life yet more understood when she comes face to face with The Beast. All types of people live amongst us, some good, some bad, some broken, some not so much, some like Kevin Wendell Crumb or Mr. Glass but let’s just hope you never get to meet The Beast.

I must say this is probably one of Shyamalan’s better directed and written stories even though it seems a bit cliché at times. He did have some great films like “The Sixth Sense” and “Signs” along with some not so great in my mind like “The Village” and “Lady in the Water” but this one holds well. It has the horror aspect working for it but more than that the thrilling suspense of what will happen next. Within the multiple personalities that McAvoy brilliantly projects on the big screen it is easy to keep track of them as well as not know what to expect from them. There are some predictable moments but many that are unpredictable giving the audience some leverage or moments to use their imagination. A nice accompanying score this film even features once again that Hitchcock moment when Shyamalan himself has his cameo. There are some moments although very few where I thought ok speed up making the film at least fifteen minutes shorter albeit Shyamalan does a nice job of keeping the intrigue going from scene to scene above and underground.

The main characters throughout the film are the three girls, Dr. Fletcher and Barry or whatever person at the time he chooses to become and overall I think the casting department made some good decisions. Buckley I loved from “8 is Enough” and “Carrie” among other films so it was good to see her on the big screen again and she did not disappoint at all. Taylor-Joy is brilliant all along taking us physically yet mentally through her characters, young and old, life and the struggles she lived then and now. Sula doesn’t speak a lot but in the moments that she does she does it well but I’d still have to say a bit more emotions may have helped. Richardson had the opportunity to really come alive but instead came off a bit dead making her my least favorite casting decision. It is McAvoy though that is pure genius and the center of attention who deserves accolades for all the different characters he played while making us laugh at times and others frightening us. It is scary to think that we live in a world surrounded by millions of people and that’s not even including their multiple personalities. There are a number of animals that grace this production but none as scary as The Beast.