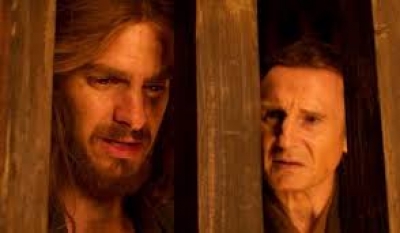 The movie “Silence” was set in a time when Christianity was outlawed in Japan.  The story was introduced by three priests in a room discussing a letter they received from another priest, Ferreira, who was in Japan. This letter took a long time to be delivered, which talked about brutal torturing methods Christian priests and converts were subjected to.  Two of the priests Rodrigues and Garrpe decided to go to Japan in search of Ferreir. On their way they ran into Japanese ex-Christian, Kichijiro, who accompanied them into Japan. He then led them to a group of people who practiced Christianity in private.  The priests were well received and acted as a testimonyof faith to these Christians. For them this was a ray of hope since they didn’t have a priest, so they practiced fellowship, confession.  Once the Japanese learned what was going on they began looking for priests and began torturing Christians as a way to lure them out.  The movie went on to show the priests being captured and the in humane methods used by the Japanese in order to convertthe priest from Christianity to Buddhism.  In short the movie was long, lacked a compelling motivating plot, there was a lot of unnecessary instances, the acting was good but the story line lacked punch.  It’s hard to critique this movie because it was so boring.

More in this category: « The Bye Bye Man Live by Night »
back to top

We have 617 guests and no members online