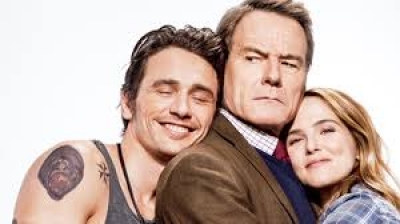 When Ned Fleming (Bryan Cranston) finds out his daughter Stephanie (Zoey Deutch) has a new boyfriend him and his family fly to California for the holidays. Upon arriving they find out that her boyfriend is none other than internet millionaire Laird Mayhew (James Franco). Fowl language, tattoo covered and maybe slightly unconventional at times he's not exactly the dream man a father wants his daughter to marry. Will Laird be able to win Ned's heart over by Christmas and get his blessing? Find out in this heartwarmingly hilarious not so family friendly movie this Christmas.

I definitely give this a 4/4 paws. This movie was hilarious and pulled many heartstrings. James Franco and Brian Cranston did an amazing job with the feuding father-in law/son-in law rolls. I was engaged in the whole movie laughing throughout its entirety. Definitely a must see. Just don't bring the kids! The F-bomb is in every scene.

More in this category: « 20th Century Women Hidden Figures »
back to top

We have 647 guests and no members online