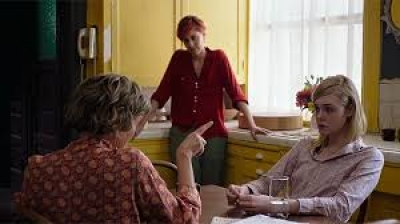 The year is 1979 in Santa Barbara, California and an old car is burning in a grocery store parking lot. This car belongs to Dorothea Fields (Annette Bening) a 55 year old divorced woman who lives in a 1905 big house with her young son Jamie (Lucas Jade Zumann) and their cat. Currently Dorothea rents rooms out to two tenants Abbie (Greta Gerwig) a woman in her mid-twenties that loves photography and happens to be recovering from cervical cancer and William (Billy Crudup) and older man in touch with his earthy spirit who is helping to remodel Dorothea’s home. Julie (Elle Fanning) at 17 she is a good friend of Jamie’s and most night’s sneaks in the house to sleep with him and talk but never have sex.

Dorothea is concerned about her son and if the lack of a father in his life could be affecting his growth process so she asks for some help from Abbie and Julie. What she discovers is that three women from different walks of life and ages may not have all the answers in helping a young boy become a man but they try anyway. What we get are the stories of each of these women’s pasts and that of William’s as well. Everyone comes from different walks of life and their experiences may or may not be the advice needed for a young man. As each of the stories unfold each woman’s past reveals many expressions of unhappiness but it is this past life that molds their futures of which they know nothing of what that will be.

Conversations some personal and some not, road trips, bar fights and a lot of drinking and smoking later life moves on for everyone. One major concern for Dorothea is that she never gets to see Jamie out in the world as a person and figures she never will. If you tend to repeat the unhappy times half the time at least the other half must be somewhat good! Either way we all live and die but is it impossible to be happy? Maybe happiness is just being!

This is a lengthy film that could have been about 30 minutes shorter. The direction seems to bounce around a lot and the writing rests on actions at times more than words. In some cases that may not be a bad thing! I mean the conversations, situations and the questions posed are all intriguing and interesting to the mind but sometimes they become a bit unnecessary. For the most part this story of love and freedom takes place within Dorothea’s home involving all the characters which happen to be developed well. A good score and some interesting throwback to the seventies fashion make this film intriguing for those of us that remember that period in time. I just thought even though I felt like an outsider looking in I never got to the dinner table like several of the extras did in the story line. As for the cast there were really only five main players with Benning leading the way who happens to do a great job but it was Gerwig and her character that seemed to grab my attention from middle to end. Crudup is more of a support and helps move the story line along but it is Zumann and Fanning that help to add the meaning of friendship without intimacy yet not for the lack of trying by Zumann who is just coming into his prime as a young man. Overall the film is very well acted and developed but like I said earlier shave off about 30 minutes and I may have been a bigger fan than I turned out to be.

More in this category: « Jackie Why Him? »
back to top