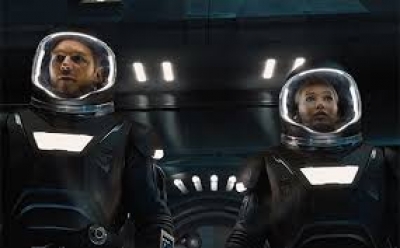 The starship Avalon has departed from earth on autopilot with a destination to the colony world of Homestead II. On board the ship there are 258 crew members and 5000 passengers all of which are in suspended animation for 120 years. After a collision alert goes off on the ship suddenly one of the passengers Jim Preston (Chris Pratt) has awoken 90 years before his time. He wonders why he is alone and were are the crew and the other passengers. Finally on this huge and gorgeous ship he finds someone else that is awake and out of their pod but only to discover that it is Arthur (Michael Sheen) a bartending android. For one year Jim has been alone on this traveling ship and has noticed that from time to time some glitches have been occurring in the ships technical abilities. Yet being alone with no one to talk to has led Jim to the verge of suicide that is until passenger 1456 has awoke from her pod. The perfect woman, a journalist from earth, Aurora Lane (Jennifer Lawrence) was on a round trip flight to write a book about her journey and life on a new planet. Little did Aurora ever expect to be awoken early and live her life to the end on a ship with a mechanic named Jim.

Time passes for the couple and eventually they go on their first date. Grant it there may only be a limited amount to do on the ship but the sights and sounds are surely worth looking at by both Jim and Aurora. As for many of the female audience members and some of the men too I’m sure you’ll have some moments to perk you up along your journey with this couple especially if you have a liking for Pratt’s backside. Anyway moving on! The first date leads to sex and more sex and eventually a relationship but little does Aurora know about Jim’s secret that is until she hears it from another source other than Jim. As a journalist she has been writing about her time on the ship but when she finds out the truth anger and rage suddenly take over. In life we all make choices whether wrong or right yet for some reasons some decisions later turn out to be the right ones.

The issues on the ship have worsened and both Jim and Aurora have band together with another unlikely crew member Gus Mancuso (Laurence Fishburne) to figure out what is happening to the ships power grid. Gravity issues, robots dying, elevators not working, and food machines malfunctioning they feel like rats stranded on a sinking ship. For one of them when they enter into the autodoc they discover they have little time left but for the other two if they don’t find out why the ship is malfunctioning then the two of them and over 5200 other people will all die. It’s a hell of a life but at least they got the time that they did no matter how long it ended up to be.

I heard this film received bad reviews from many other critics. Sorry for putting water on your fire but I actually did not hate it. Maybe because the writing in this film fascinated me about right from wrong, ethics, morals, taking life versus giving it in addition to other topics suitable for the intelligent crowd to discuss amongst themselves but either way minus the somewhat dead spots in the story line I liked this film. There are not a lot of bells and whistles but there is good direction, superb writing, spectacular cinematography and a wonderful accompanying score. Look past the small cast although a visually attractive one and look into the what if factor in their lives and for that matter yours in considering what you would do or not do. As we as people look beyond our own stressed planet known as earth we too are looking at options hence Mars so the premise to this story is not that far away from the truth. Both actors Lawrence and Pratt are great to look at but besides that they bring life into the story line making you question what would you do. As for Sheen he brought a bit of levity and conversation to the story and the other actors making the time pass on the ship and for that matter in the theater.   As does Fishburne for the short time he is introduced in the story but throughout it all if you accept the film for what it is rather than what you want it to be then maybe you’ll walk away with a little less judgement and a little more understanding about life no matter where it tries to live.

More in this category: « Sing Jackie »
back to top

We have 609 guests and no members online