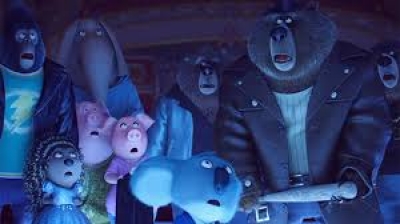 As a young boy Buster Moon (voice of Matthew McConaughey) thought he wanted to be an astronaut that is until his father took him to the theater to see the ever so popular young Miss Nana Noodelman (voice of Jennifer Hudson). Years later Buster was running Moon Theater but instead of running it successfully he was running it into the ground. His employees were receiving bad checks and the bank is looking to repossess the theater for lack of payments.

Suddenly Buster comes up with a brilliant idea and runs it by his friend Eddie (voice of John C. Reilly) who has a very wealthy father. Buster wants to start a singing competition with a prize worth $1,000 but when his secretary Mrs. Crawly (voice of Garth Jennings) makes a misprint thanks to her glass eye she mistakenly marks the prize as $100,000 and thanks to an office fan, all the flyers blow out the window and scatter all over town. Before you know it animals are lined up around the block to audition for a chance to win a grand prize that even Buster is not quite aware of yet.

Buster rounds it down to a few finalists like Rosita (voice of Reese Witherspoon) an at home mother pig of many and married to Norman (voice of Nick Offerman).   She ends up with a partner Gunter (voice of Nick Kroll) who helps her with her dance moves. Mike (voice of Seth MacFarlane) a mouse with style and the voice of Frank Sinatra who eventually ends up in trouble with the three bears. Ash (voice of Scarlett Johansson) who loses her boyfriend Lance (voice of Beck Bennett) because of the competition and a girl porcupine named Becky. Johnny (voice of Taron Egerton) a gorilla whose father leads a life of crime but all Johnny wants to do is sing. Then there is the shy elephant Meena (voice of Tori Kelly) that is too shy to try out but is graced with the voice from God. These and a few others are all a part of the act but when the worst that you think could not happen does happen all the hopes and dreams for a special few to try in win the competition is lost.

Yet somehow the show must go on and once what was indoors is now out and fear does not stop any of them from doing what they love they all decide to sing for themselves. Some shake it off while still standing and free doing it their way while making everyone proud.   Thanks to an older Nana (voice of Jennifer Saunders) a new moon has risen and Buster has made his father proud.

I wanted to rank this film higher and I’m not sure I did not due to a mother behind me in the theater that had three kids with her that were absolutely out of control, talking, kicking the chairs, running up and down the aisle and more. One would think that an adult woman could control that in a theater so as to make the film more enjoyable for all the other people in the theater seated around her but in her world wherever that may be I guess not! Ok so that rant is out of the way I really did enjoy this film in between turning around to scowl at the crazy kids behind me old enough to know better that thought they were at a playground with a woman that apparently does not care what they do. Ok I guess I’m not over it but anyway the film is extremely well directed but the writing lacks good comedy lines. I mean you have a world of animals living in a city like humans do; trying out for a singing competition and sadly enough the writers lacked the opportunity to make us laugh. I did chuckle a few times but not as much as I thought I would although there are a few sentimental tear jerking moments that come across great. The music obviously is phenomenal as is the animation and the choice of voice actors is superb. I believe this film especially with the amount of great marketing surrounding it and the amount of enjoyable animal characters should do extremely well but remember to try and pick a seat far away from the crazy kids and their lazy mom. Enough said!

More in this category: « Collateral Beauty Passengers »
back to top