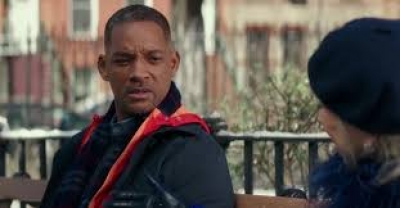 Collateral Beauty is how things interlock and how even loss can reveal moments of meaning and beauty. Howard (Will Smith) is partners with his best friend Whit (Edward Norton) at a New York City advertising firm which is where Howard is giving a pep talk to his employees about love, time and death. Three years earlier we discover why! It seems the firm is losing its accounts since Howard lost his six year old daughter Olivia (Alyssa Cheatham) to an illness 2 years ago. Ever since that time Howard has become a recluse for the most part, no longer with his wife, cannot function at the office other than to build dominos only to watch them fall and can’t cope with his daughter’s death at all, no food, no sleep and no peace of mind. Claire (Kate Winslet) who has devoted her entire life to the firm feels his pain even more so than the possible loss of her job should they continue to lose accounts. They even got a chance to sell the business to another firm but Howard is not even mentally capable to sign the papers to consider the offer. Simon (Michael Pena) who serves on the management level with Claire and Whit cannot afford to lose this firm nor the offer to sell since he needs it to support his family now more than ever.

After Whit meets Amy (Keira Knightley) at the firm while she is auditioning for a commercial he later meets two of her friends, Brigitte (Helen Mirren) and Raffi (Jacob Latimore) from the Hegel Theater Company, actors working on a possible stage play. Since they need money to put the play on and Whit needs to expose Howard’s incompetency and unstable state of mind he hires the three people to play roles in manipulating Howard to prove he is incapable to run a business. Now grant it they are all his friends actually like family but the business is dying and so might they if things don’t change. Since Howard has been writing letters to love, time and death, information discovered by a private detective named Sally Price (Ann Dowd), Whit figured to assign each of the actors one of those roles and try to scare Howard back into reality or at least prove his mental instability to the lawyers so that they can sell the firm.

Howard tends to keep a regular routine, visiting the dog park but he has no dog, writing letters to love, time and death as well as stopping by a support group on child loss and staring in the window but not going in. It’s not until one night he decides to join the group does he speak with a member named Madeleine (Naomie Harris) who desperately tries to get him to open up about the death of his daughter. Everyone Howard has come in contact with is trying to help him while also dealing with their own personal issues. Time is the terrain between love and death but one cannot live without love and in life and death what affects one person will always affect many others in one way or another. Sometimes you may wish you could become strangers again with the ones you love so that you don’t have to suffer through the pain of loss and regret of not being able to say goodbye. Life is but a dream yet the choices you make and the people you meet during this time all have purpose so you must always make sure to notice the collateral beauty along your journey.

I absolutely loved this story which contains some very moving twists and turns from start to finish. The direction was perfect and the writing superb with some predictable moments throughout but either way it does not distract from the true meaning of this film. Have you ever met a stranger and wondered why or what was the purpose of their words or their actions well maybe because this person was a sign from whatever higher power trying to get you to notice what is important and what matters and most of the time it is you. We as a society are so mixed up in dealing in life and what it has to throw at us that we don’t pay attention to the everyday signs in life trying to get us to notice them and pay attention to their meaning. This story is a perfect example of love, time and death so if you pay attention you will appreciate the journey. For those that have not experienced death in their lives then you may not feel the connection as well as someone who has loved and lost throughout their time here but either way I highly recommend this film and the lessons it tries so hard to teach us that truly matter in the meaning of life. I heard some of my fellow critics did not like this film as much as I did but take it from me it is worth the journey for those of us that are trying to deal with love, time and death.

Smith once again is spectacular. I am already a true fan of his for a long time and this film as well as many of his others proves why. He truly puts his heart and soul into this role. Norton is the prefect best friend who tries to do the right thing while still trying to work on his own family issues, as are Winslet and Pena. The three actors Mirren, Knightley and Latimore all have something to teach Smith’s character as well as the others and the audience of course and do it with deep intentions and spirit. Harris is touching and the stories during the support meetings are heart wrenching but important to the healing process. Overall I truly appreciate the meaning of this film, the acting by the leads and supporting actors but more than anything the journey it takes Smith’s character on while incorporating the entire cast and the audience as well. It’s Christmas and that time of the year to spend it with the ones you love but if you can’t at least remember how much they mean to you and maybe take a friend and go see a beautiful story that may make you cry but will remind you of the signs and people around you that truly take the time to love you before death comes knocking for you.

More in this category: « Rogue One: A Star Wars Story Sing »
back to top

We have 315 guests and no members online