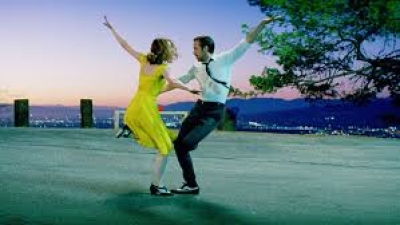 Have you ever been stuck in traffic bored out of your mind with nothing to do but listen to music? Well how would you feel if everyone got out of their cars and joined together in song and dance under the sun while all having fun? What a happier place life would be! In the opening of this story we all get to see just how happy. When traffic begins to move Mia (Emma Stone) doesn’t move but when Sebastian (Ryan Gosling) lays on his horn all he gets to see is a bird.

Its winter and Emma is an aspiring actress who happens to work on the Warner Bros. lot but not as an actress rather a barista serving coffee to working actors. She lives with three roommates which if you’re familiar with the cost of living in Los Angeles is the norm for struggling entertainers. Mia spends her days at the coffee shop while also getting one rejection after another at her auditions. Sebastian has dreamed of one day buying the Van Beek club and turning it into his own jazz club. A polished piano player, music creator and writer he spends his days playing at some restaurant/bars playing music that no one wants to hear other than the owners. He lives alone that is unless his sister Laura (Rosemarie DeWitt) drops by for an unannounced visit.

One night after walking home from a Hollywood party Mia wonders into a local restaurant ad what she discovers at the piano is the man she threw the bird to on the highway but due to circumstances Sebastian just walks right by her and leaves. It’s spring and sometime later they come across each other at another house party in the hills and this time they finally hold a conversation and later he walks her to her car but not to quickly since both break out in a little song and dance. Think Ginger Rogers and Fred Astaire. Where have the great musicals gone? Well hopefully this film is the launch to bringing them back to the big screen since this story was the perfect mix of old and new adding a nice touch of class and nostalgia in today’s modern world of arts and entertainment.

Finally they become a couple and Sebastian realizes that Mia hates Jazz. Next step is getting Mia to appreciate the history and the legendary background to Jazz while romancing her under the city of stars. So much for their first kiss but after dancing with the stars they finally seal the deal with a kiss. In the summer months an old friend, well kind of, Keith (John Legend) offers Sebastian a job at the keys paying $1,000 a week with a percentage of ticket sales and merchandising all under the hot and hip name of The Messengers. Life was good, the money was coming in as was the fame but the relationship for Mia and Sebastian began to take a turn for the worse. In the Fall Mia misses him terribly but when he explains he may be on tour for years and her one woman act, ‘So Long Boulder City’ has become a flop Mia claims it is over, all of it.

Maybe life is a pipe dream and it’s time to change your dreams and grow up, at least that’s what Mia thinks. When she receives a casting call from an unexpected source life does change. She wonders where she is in life and that time will wait and see but no matter what happens between her and Seb there will always be love. Five years later in the winter it’s the holidays and life has evolved for Sebastian and Mia. If only to think what a difference a first kiss makes and in the end what a difference a smile makes then maybe just maybe what could have been would have been from season to season.

This film is pure joy, truth, reality, music, dance, love, loss, beauty and pure genius. As a Gen X so to speak maybe I appreciate it more than the Millennials but either way with the excellent direction, writing, cinematography, score, soundtrack, the quality of old school mixed into a modern era this film should be a must for all audiences. I only hope this film helps to bring back true entertainment worthy of the family to watch to the big screen. There are mixtures of supporting actors all with skills in song and dance but obviously it is Stone and Gosling that control this film from start to finish. There are a few slow moments throughout the story that could have been tightened up in my opinion but otherwise this film is brilliant. Let’s hope Hollywood see’s there is a niche for this type of film making once again. Surely the lead actors, direction and other categories will be noticed at the Oscars and hopefully this land will draw in a nice box office dollar to make the executives happy so as to make even more musicals for the big screen.

More in this category: « Office Christmas Party Rogue One: A Star Wars Story »
back to top

We have 827 guests and no members online