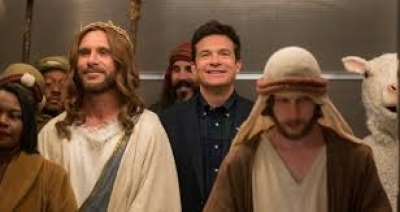 Review written by Jon Patch with 3 out 0f 4 paws

Clay Vanstone (T.J. Miller) and Josh Parker (Jason Bateman) are not only best of friends but they work together at Zenotek a data storage systems company. Actually Clay’s father owned the company but when he died he left the position of CEO to Clay’s anal sister Carol (Jennifer Aniston) and Clay was left to manage the Chicago division with Josh his Chief Technical Officer. All the employees are happy at the job but spend most of their days chatting at the water cooler or just spending time doing nothing that is until Carol shows up with some not so good news. It seems Carol is looking to shut down the Chicago division as she did with several other divisions and is looking to make major changes at the office, 40% cuts of employees, no Christmas bonuses and many layoffs. Some would say Carol resembles Scrooge or better yet the Grinch who stole Christmas?

Carol has always considered her brother a loser and has no problem leaving him out in the cold along with the people who work for him except for Josh; Carol has plans for him along with Tracey Hughes (Olivia Munn) a chief developer there that is working on an internet system known as ANYWAIR. Well, Carol is on her way to New York to visit that division and Josh unknown to Carol has decided to throw one of the biggest and maddest office party’s yet. Why you ask since Carol told him no? Well Josh is trying to prove to Carol that he can save his division and one way of doing this is to impress old school mentality Walter Davis (Courtney B. Vance) to invest his millions in Zenotek rather than their competition. So what better way to impress than to invite Walter to the company Christmas party so he can see for himself that everyone at Zenotek is just one big happy family and the rumor of shutdowns are just that, rumors.

This is the office party you always want to be invited to but never be responsible for let alone have to clean up after. Mary (Kate McKinnon) the head of HR, Trina (Jillian Bell), Jeremy (Rob Corddry) from customer service, Allison (Vanessa Bayer), Fred (Randall Park), Joel (Sam Richardson), Nate (Karan Soni) and Meghan (Jamie Chung) are all there along with some reindeer, a horse and a few hundred others to ring in the holiday, drink, be merry, naked, drugged out and just plain crazy. When Carol shows back up at the party unannounced and Clay goes missing thanks to a hooker and her pimp with a gun, Josh, Mary, Tracey and Carol go on a journey throughout Chicago to find him but what ends up happening that night is truly what ends up saving Christmas for all and to all a good night at Zenotek.

The story is not original but well directed and written enough so to keep you interested and intrigued, laughing a bit but for the most part not out loud. It is the party of the year that many would talk about for the rest of their lives. Some good music, interesting antics along with some serious yet not so serious relationships help keep the pace going throughout the film adding in a bit of language and nudity this story has a little of something for everyone. Bateman and Aniston are key together as they both show off their strengths as actors and as lead characters in this story line. Miller is the rich kid that never grew up and Munn is the opposite being the overly mature, smart and reliable co-worker. McKinnon adds a touch of dry humor and even a Hillary catch phrase dropped in from her SNL character. Corddry also has the dry humor that works for him and the other supporting actors help pull this party of all parties together to make it the talk of Christmas office employees for years to come. Remember to stay through the credits for some bad cuts, bloopers and exciting pictures to enjoy almost as much as the film itself.

More in this category: « Moana La La Land »
back to top

We have 371 guests and no members online