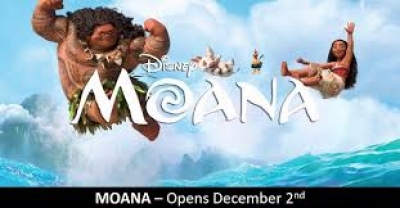 Moana is the daughter of the chief of an island. Her father wants her to inherit his position after him, but she wants to out in the ocean beyond the reef because the water has always called to her. Her grandmother is a wise woman who has passed down the stories of the island telling how the demigod Maui took the heart of the island and the island is dying with-out it. Moana feels she has been chosen to restore the heart of the island.

Moana is friends with the ocean. She and Hay-Hay, the chicken set out to find Maui under the stars of the hook. Maui is able to shape shift with the hook. When Moana finds him he doesn't want to go with her and leaves her on his island trapped in a cave. She escapes and makes it impossible to sail the sea without her. Moana tells Maui about the heart and how it needs to be restored. He finally decides to help her. Along the way they struggle, having to go up against these coconut looking tribe who wanted the heart for themselves. Eventally they get the the hook from the crab. After the hook is found they have to go against the Lava monster who stands in their way of getting back to Moana’s Island. Will Moana and Maui defeat the Lava Monster and restore the island? You will have to go see this movie to find out.

More in this category: « Bad Santa 2 Office Christmas Party »
back to top

We have 846 guests and no members online