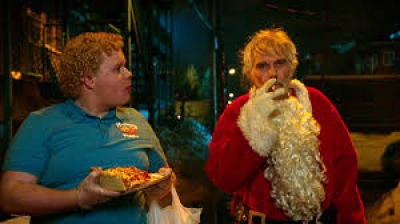 What do you get when you have a drunken old fool down on his luck and constantly followed by a 21 year fat boy named Thurman Merman (Brett Kelly) from Hungry Hoagie? The answer is Willie (Billy Bob Thornton) a fool of a man now at the end of his rope literally that paid the price previously by playing bad Santa in a crime gone wrong. Although the day became brighter when the kid, Thurman, brings Willie an envelope filled with money as a down payment to a job with Marcus (Tony Cox) his previous pain in the butt crime gone wrong partner. Now Marcus wants to work with Willie once again in a Chicago heist worth millions.

When the guys arrive in the windy city Willie not only finds out it’s a job to rob Giving Charity of the millions raised to help others during Christmas time but also that he has to wear a Santa suit once again. He also later discovers he will be working with his mother Sunny Soke (Kathy Bates) as well. Both of the men take fake names and end up volunteering as Santa and his elf whereas Sunny takes the role of Mrs. Santa. All three are set to rob the safe from Giving City, a charity run by Diane (Christina Hendricks) and her not so innocent husband Regent (Ryan Hansen). There are a few obstacles though Dorfman (Jeff Skowron) and Gina (Jenny Zigrino) who work security at the charity as well as the face that Willie does not like his mother nor trust Marcus since the last heist but sometimes one must rely on second chances to move ahead in life. One thing Willie did not bank on was the kid showing up in Chicago, the slutty affair he was having with Diane nor the greed of people he thought he could trust yet a shot to the butt and one big happy ending leaves Willie quite naughty but a little nice.

The film at 90 minutes seems to move along well with something going on the whole time however rude and crude it could be but that is the basis of this story. It is directed well with some humorous but insulting writing and language throughout never missing the opportunity to drop the F bomb when they could. It has that Christmas feeling of snow, music, Santa’s everywhere and the scent of holiday cheer sometimes but overall it is not the film to take the entire family to unless they are over the age of 18. If you’re going to see hark the angel sing that is not going to happen here but maybe in this not so silent night you may see mommy kissing Santa Claus either way enjoy it for what it is but be prepared to be insulted by the not so merry man himself, Santa.

Thornton delivers his lines with a dry and disgust sense of humor but it works well for his character especially when he is dealing with his shorter co-star Cox. Both of these men flatter each other well and definitely don’t hold back. I love Bates and again in my opinion she does not disappoint even while looking like a rough and crazy butch lesbian with a vendetta for revenge. Kelly is a bit odd and strange in this role right from the top and that never changes which plays well with his character. Hansen has a small role and Sopron and Zigrino somewhat larger leaving all three to compliment the plot of the story and its main characters. As for Hendricks she was a great sexual tease to the story and that of Thornton’s lead character Willie who stops at nothing to get what he wants whether as Santa or not. Albeit in the end I enjoyed this film which is very far from kid friendly yet has a little sense of the fact it’s beginning to look a lot like Christmas.

More in this category: « Allied Moana »
back to top