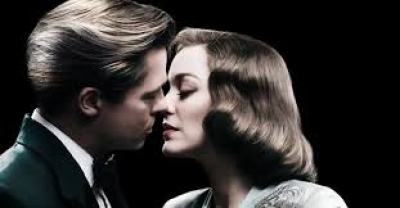 A man drops from the sky by parachute in the French Moroccan desert while a car picks him up and in the backseat is a piece of luggage containing passports, money, cloths, guns and a wedding ring. The year is 1942 and this man Max Vatan (Brad Pitt) arrives in town to meet his wife for the first time Marianne Beausejour (Marion Cotillard). She has been there already establishing friends these same friends that thought Max was a ghost until they finally meet him in person. There on leave for six weeks from his phosphate company to see his wife obviously they are both there for one reason, to kill the German ambassador and of course any other Nazis that get in their way. The biggest mistake that Max and Marianne can make on this assignment though is to develop actual feelings for each other. After their first sexual encounter in the middle of a sand storm there is no turning back from this point on.

Three weeks later back in London Max and Marianne are married and before you know it Marianne is pregnant and having a baby in the middle of the street while bombers are attacking their country. One year later Anna their daughter is growing quickly and the love between her parents is forever strong. Life though suddenly takes a bad turn when Frank Heslop (Jared Harris) at headquarters informs Max privately that intelligence have discovered that Marianne may be a spy. Of course Max struggles with the possibility not being able to grasp the chance that this life he had with her was all a lie and what of their daughter Anna? Frank informs Max that they set her up and in 72 hours they will know for sure about her loyalty to the country she lives in and the family she loves.

Max cannot stand still even though he tries his best to hide his feelings from her acting as if life is normal in their home he still breaks away to do investigations on his own behind headquarters back. If it is found out that Marianne is a spy Max has to terminate her himself or else the military will kill them both leaving Anna with no parent at all. Max confides in his lesbian sister Bridget (Lizzy Caplan) of the situation of which she offers him support but he wants the truth and does not want to wait 72 hours. He had heard that this may be a test for him judging if he is emotionally stable to increase his rank status and that all of it is just a made up lie but Frank begs to differ. Like the keys on a piano Max wants it in black and white leaving no gray areas of concern. In the end it was all for love and Max finally got his ranch and horses thanks to the love of a mother.

I thoroughly enjoyed this film especially the music since I’m a huge swing fan but the cinematography is outstanding as well. Granted I liked the direction of the film which plays out well and the writing is pretty smart although I wondered if at times the French accent by Max was edited in for some reason. Period pieces like this usually have a great wardrobe and this one does not disappoint especially in regards to the women. I felt though that at times Pitt was a bit off seeming a bit laid back or not putting his all into some of the scenes. Cotillard though was quite the opposite she was on course the entire time from beginning to end and speaking of the end yes I welled up a bit. Harris was a good authority figure and friend but I thought Caplan was a bit misplaced almost like her lesbian role was thrown into the story for some reason but never really developed. Grant it this is a love story in the middle of war more so than a war story in the middle of love but either way it is worth seeing on date night at the movies.

More in this category: « Nocturnal Animals Bad Santa 2 »
back to top