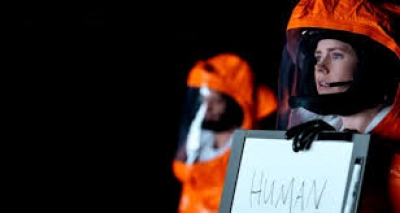 In life we all experience memories, some forgotten yet some that flashback into our minds with beginnings and endings either way we all as humans have some sense of our life past, present or future. Dr. Louise Banks (Amy Adams) is a professor teaching language at her local college. Everyday living with the loss of her daughter Hannah (4 years old Jadyn Malone, 8 years old Abigail Pniowsky, 12 years old Julia Scarlett Dan) she continues to move forward as best she can but always thinking of the past. Tragedy in a family can sometimes destroy what was once important creating a void or change in direction in one’s life. One particular day at school most of her class was missing but what she discovered was that they were absent due to an international occurrence. What seems to have happened is the presence of UFO’s twelve to be exact dispersed across the world, one in Montana, another in Russia, China, Sudan and several other countries on Earth. Shaped like half of a circle these shells hovered close to the ground giving no sense of sudden alarm other than their reason for being on Earth.

Colonel Weber (Forest Whitaker) sought out Louise to help the military communicate with these aliens since she once before had top secret clearance in another military matter. On her way to Montana via army helicopter she meets Ian Donnelly (Jeremy Renner) on board who is also there to try and determine why these shells are here. Every eighteen hours humans are able to enter the shell and on that first day for Louise and Ian they entered with a bird an old tactic used in the mines to test the presence or lack of oxygen. There has been no physical contact between humans and the aliens but there has been some form of communication in the shell that of which Louise is there to decipher with the help of Ian and other military personnel. Known now has Heptapods the crew would enter on a daily basis to work with these odd looking aliens in order to understand why they are here whether with good or bad intensions.

Louise would continue to have visions some while asleep but others while awake and as she tried to piece these occurrences together for answers the military was moving quickly in other ways as were the other countries. It wasn’t until a symbol of their language was understood to stand for weapon did matters take a turn as China gives the aliens 24 hours to leave, give their intentions or else. As China went off line it did not take much for Russia and the other countries to follow. Sometimes the human emotion of fear is not the best determination of the truth but this warning caused the Heptapods to move a half a mile above land as a precaution against what might happen. At this time it took Louise to determine what their intent was and it took some dying words to change the outcome of what could have been. If you had the chance to live life again from start to finish would you change anything?

This film is a 100% thinker story causing your human mind to evaluate the what if’s in your own life. Although the film has its special effects it is not an action film whereas mankind is running for their lives it is more of what would you do before you had to run. Some great writing that will confuse you at times but pull you together in the end is accompanied by some very dramatic and often dark score. The characters are fairly well developed especially that of Louise who happens to control this film from the very start to the very finish. This is truly a film for the intellect and if you can’t grasp it in the end you may not like it as much as I have since for me in my life I question and analyze all of the what if’s sometimes getting an answer and sometimes not. There are a number of actors in this film but the attention is mainly on Adams who controls every scene she is in with some very intense emotions. Renner is a bit straight laced but plays a good partner to Adam’s character. I am already a fan of Whitaker and once again he does not disappoint. In the end this film leaves you thinking about life, love, loss and the what if’s in this life which I believe is some very important topics for this time in life and the life that is still yet to come.

More in this category: « Moonlight Bleed For This »
back to top

We have 632 guests and no members online