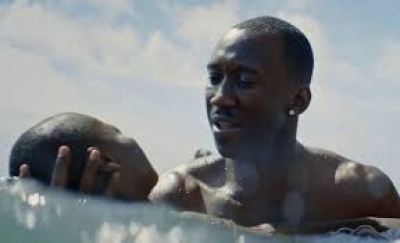 Is an epic film shown in three parts...stages of a (boy/mans) young
man’s life growing up in the ghetto in Miami, under privileged,
misunderstood and questioning his existence of who he is and who he is
going to become. Directed by Barry Jenkins this movie took me to many
points of high and lows as it beautifully told his story of a boy/young
man who had so little to say in actual words, but actions depicted
every intense moment of his life. It was difficult watch at times
because it gives you the thought that you might walk away with more
questions than answers as the story elegantly unfolds of a young man...
tragically shaped by inner city social injustice, under lying sexuality
identification and emotional turbulence that are revealed by
conversations that have few words.

Chiron faces his early days growing up with a crack head mother who
could not respond to his needs or to respect him and how he finds
independence in a drug dealer (Mahershala Ali) who gives him confidence
and provides a father figure in an unpredictable manner.

His youth and innocence are soon lost in the second part as he battles
the visceral reality of inner city Miami high school with the challenge
of exploring his sexuality and identity. I loved the sound track as so
many scenes were played out to symphonic music to some of the harshest
times of his life. Again where actions are more powerful than word's.

Chiron played by Ashton Sanders in the last part of his mid-20's life
was brilliantly acted and depicted as he searched for his purpose in
life retuning to Miami were he reconnects with his first love in an
inspiring scene of emotions.

SEE THIS FILM IT IS SURE TO TAKE MANY AWARDS AND RECOGNITION!
This film will leave you sad and inspired with a lot more respect for
certain cultures and life styles whether they are chosen or just a part
of one’s life story.

More in this category: « Doctor Strange Arrival »
back to top

We have 601 guests and no members online