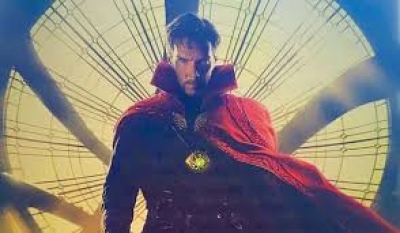 A very prominent and successful neurosurgeon Dr. Stephen Strange (Benedict Cumberbatch) had the best of everything. He has a nice apartment in the city, expensive clothes and jewelry, a beautiful ER girlfriend Christine Palmer (Rachel McAdams) and a very fast car. One night on his way out Strange is texting and driving along a very curvy road when suddenly he experiences a very horrific crash. Barely alive he later awakens in the hospital and by the looks of his wounds his career as a surgeon is over.

As time passes by and Strange a very egotistical man has tried everything to stop his hands from shaking but the nerve damage was too extreme. He heard of a man, Jonathan Pangborn (Benjamin Bratt) that has gone on a journey to Kathmandu, Nepal to study under someone known as The Ancient One (Tilda Swinton) and through some type of miracle Jonathan was no longer paralyzed and able to live a normal life. Strange in the past has spent his money as fast as he made it and at this time in his life unable to practice he is running out of money. He spends his last dollar to get to Nepal in hopes of helping his hands recover to their full potential under the watchful eyes of The Ancient One. First though he meets up with Mordo (Chiwetel Ejiofor) who helps him in a crisis on the streets and late leads him to his destination.

Strange meets with The Ancient One but what is discovered is that he is not ready, too sarcastic and disbelieving of her power and teachings. Once Strange learns to forget everything and accepts that the spirit is what shall heal the body and that healing is belief then his lessons will begin. We never lose our demons; we only choose to live above them. Strange settles in, studying the ancient books that are protected by Wong (Benedict Wong) the new librarian since the last one happened to be beheaded by Kaecilius (Mads Mikkelsen) and his men all for a few pages from one of the sorcerer’s books about the forbidden ritual.

Still in the process of learning but coming along quickly Strange with the help of Mordo and The Ancient One suddenly finds himself battling Kaecilius and his men. The battle ensues for some time and through several dimensions but thankfully the cloak of levitation has found a home right on the shoulders of Doctor Strange. After a treacherous battle Strange knows that Kaecilius and his Zealots will return to fight again in hopes of bringing the dark dimension on to mankind. In Hong Kong that final battle ensues and thanks to a bargain Strange believes the world will continue anew but rules were broken and soon the bill will come to fight another day. Remember to stay through the credits for some answers into the future and I mean all the credits right to the end.

This film was superb, great direction, writing, score, wardrobe and a screen full of some fascinating special effects and cinematography. I actually loved the cloak which tends to add a bit of humor as does Strange of course. As long as you pay attention to what is going on from moment to moment you should not get confused since the writers make the journey easy to follow like I said as long as you pay attention. It was truly brilliant the way the film draws you in with the help of 3D almost making you believe while watching the story that your spirit or that of the energy within your body is capable of almost anything. There are some twists and turns along the way but overall they all make sense right into the credits. As strange as it may not sound I really look forward to seeing more of Doctor Strange in the very near future.

Cumberbatch is spot on with his humor, strength and dramatic ability to hold your attention to his every move. I’m a big fan of McAdams and even though her role is not that big she adds a sense of stability to her leading man along with that of trust for the one she loves. Ejiofor is very strong in his role as he fights alongside that of Strange. Mikkelsen makes a good villain and Swinton really shows off her power as a woman not to be reckoned with unless you wish to fail. There are a number of actors that take on the role of the Zealots and all do a great job physically which is all that is needed since their leader Kaecilius does most of the talking. Great supporting characters and extras all contribute into making this film worthy of a box office ticket and word of mouth should keep it going for some time.

More in this category: « Hacksaw Ridge Moonlight »
back to top

We have 607 guests and no members online