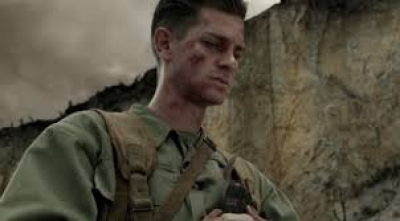 A very young Desmond Doss (Darcy Bryce) grew up in the Blue Ridge Mountains, Virginia with his brother Hal (Roman Guerriero), loving mother Bertha (Rachel Griffiths) and alcoholic and abusive father Tom (Hugo Weaving). Tom was a good man before he served in war, losing close friends of his and living the horrific memories have turned him into a hateful and abusive man.

Fifteen years later the Doss boys have grown into young men and against his parents’ wishes Hal (Nathaniel Buzolic) has joined the military whereas Desmond met a nurse working in the Lynchburg Hospital a few miles from his home. Desmond dreamed of becoming a doctor one day and not only being fascinated with this girls work he was more so with Dorothy Schutte (Teresa Palmer) the girl herself. As time went by Dorothy became Desmond’s girlfriend and later when he informs her he has enlisted in the army their love has grown so strong that they planned to get married when he is able to return on leave.

Arriving at Fort Jackson Desmond now referred to as Doss by Sergeant Howell (Vince Vaughn) a tough but sometimes unknowingly humorous man he meets his comrades that he will train with and serve at battle with when they fight at Okinawa. Captain Glover (Sam Worthington) did not like Doss because of his religious beliefs and the fact that he made a promise to God he will not kill another man meaning he will not handle a gun, ever. Doss although he held his own was not favored by many especially Smitty (Luke Bracey) who often fought and took advantage of what he thought was a weakness. Most of the men in his barracks, Lucky Ford (Milo Gibson), Andy ‘Ghoul’ Walker (Goran D. Kleut) a strange looking man, Vito Rinnelli (Firass Dirani), Milt ‘Hollywood’ Zane (Luke Pegler) not shy about showing his naked body, Tex Lewis (Michael Sheasby), Popeye (Sean Lynch) and a number of other privates did not understand why he held so strong to his beliefs but it was the military itself that decided to try and claim Doss insane with a section 8. Well that did not work nor did any of their other attempts but when his father Tom stood by his side with a little help from above Doss was free to serve as a combat medic without a gun and eventually able to marry Dorothy.

The men arrive at Okinawa in May of 1945 in hopes of taking the ridge and eventually Japan but what they encountered was the wrath of hell. In peace son’s bury their fathers but in war fathers bury their son’s and in this war so many young men’s lives were lost. From the moment the men first took the ridge the scene was horrific, many of the men lost their lives, many lost body parts but in the end one man a combat medic that was once hated for his beliefs was the savior of so many men that when that time came when our men took “Hacksaw Ridge” it was due to the beliefs of one man and his bible, Desmond Doss. WWII American Army Medic Desmond T. Doss, who served during the Battle of Okinawa, refusing to kill people, became the first Conscientious Objector in American history to be awarded the Medal of Honor.

This film is absolutely remarkable. It has the family issues, the character development, and the romance in the first half but when it comes to the second half brace yourself for the horrors of war. I personally was able to relate with a number of moments in this film which in turn shed some light on my childhood and the relationship with my father. Those memories of lives lost, people you know and serve with killed in front of your face are nightmares that never go away. So it explains to me how a man of war can lose his way and himself after returning home. It is a harsh reality in life and a battle within the family to live with once a good man that due to the horrors of war has become bad in many ways. Gibson should be honored for this work which really shows the effect of war on mankind. Grant it there were a few issues in the editing room that I noticed in the first half of the film, the ear, the shadow on the waterfalls, the American accents at times but overall it is the truth within this story that stands tall and honest thanks in part to some incredible writing as well. I was pleased to be sitting in this screening with some very young cadets but when the extremely violent, graphic and horrid scenes of war were happening some of the comments by these young soldiers were a bit unhinged in my opinion. I think as an older man I have experienced the times of maturity and although I have not served in battle I have my own scars and I pray that these boys will never have to experience what my father did or for that fact so many soldiers have recently in Afghanistan or Iraq, wars of today. One frightening thought that wars of the past are no longer as what the wars of the present time can be and let’s hope that the wrong person never has control of that power to push a button. Overall this film is powerful, romantic, truthful, violent, honest, and horrific and at times will leave you breathless but throughout it all I hope it will make you think of just how senseless hate can be and the repercussions it can have on mankind.

Garfield is remarkable and by all means should be considered during Oscar season. Palmer was well cast as were Weaving and Griffiths but it was the actors that played soldiers, Bracey, Worthington and all the others that truly bring this phenomenal story to life on the big screen. I was pleasantly surprised not being a huge fan of Vaughn knowing him mostly for comedy that he really did a great job in this dramatic film. He does have his moment though when he first meets the men in their barrack, this scene is absolutely hysterical and priceless and I only wish I had those moments on tape to play over and over. Besides some birds the only animal actors if that’s what they were are the rats that fed on the wounded and dead soldiers atop “Hacksaw Ridge”. Albeit I laughed and I cried watching this film and as I said lived through some of the harsh realities of the effect of war on a man but if for anything I hope the people that go and see this film and you should, leave with the sense of what our men and women of the military have done for us then, now and surely in the future.

More in this category: « Trolls Doctor Strange »
back to top

We have 826 guests and no members online